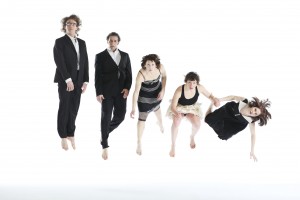 As Julia Rhoads, director of Lucky Plush Productions, points out, marriage is not a popular subject for dances… or many other performance arts for that matter. The ambivalent states of trust and doubt, of taking on a new identity for oneself and for the world outside the marriage and of lifetime romantic fidelity are a lot harder to explore in a two-hour performance with any kind of depth or sensitivity than the purer emotions of, say, infatuation, grief, aggression or joy. Yet the joined forces of Lucky Plush and physical theater ensemble 500 Clown have done just that: A work-in-progress showing of “The Better Half” back in June put forth a piece of tremendous humor, humanity and, as to be expected in the hands of Julia Rhoads and Leslie Buxbaum Danzig, smartness. Their launching pad: The iconic 1944 film “Gaslight” in which Ingrid Bergman is slowly driven mad by her draconian husband. In other words, a script that is anything but humorous, sensitive or ambivalent.

Rhoads said they came to the material naturally. “We had an early workshop back in the spring of last year, where Leslie and I just wanted to play together. We brought in performers to see how our languages worked together. ‘Anna Karenina’ was the source script,” Rhoads told me. “We loved working together. But ‘Anna Karenina’ wasn’t it. At that point, the most compelling thing about that story for us was the idea that you’re in your life and your life is laid out for you, but there are escapist tendencies. Leslie had worked on the play adaptation of ‘Gaslight,’ called ‘Angel Street.’ It was part of her Ph.D., it was something she was always excited by: it’s fun, it’s noir. It has a lot of opportunity for the characters to want to leave that story. Ultimately the ‘Gaslight’ story is very two-dimensional, but it felt like a great spine to hold all the ideas we wanted to explore.”

The choice of a two-dimensional story gave Rhoads and Danzig lots of space to mold a living thing of meaningful substance. What is remarkable is how they build and breathe life into it before the audience’s eyes. The show opens with four people on stage, being told by an off-stage director (Tim Heck, a comedic natural who will happily join them later) the names of the characters they are to play. We watch the creation of the piece in the performing of the piece, each person gradually becoming, rejecting or co-existing with his or her role via episodes of dialogue, dance and circus arts. The simulacra of identities generates plentiful opportunity for reference and humor (and prevents the show from becoming bogged down in the menacing moments in the script), yet maintains respect for the performers and transparency about the journey taking place.

“I generally work with the idea that the person on stage is speaking as themselves. There’s a casualness about the dialogue and being in service to character and narrative,” Rhoads says. “This piece leans more into a narrative arc, and we’re the characters inside it, but we’re also the performers inside it. There’s a feeling in this work that things are being discovered in real time with the audience. There’s a causality that pushes the story forward. There’s an improvisational aspect to it too. Both Leslie and I are interested in performers being in a response-based place and not a show-mode. What is the real thing happening here and now?”

The genuineness of the moment, the chemistry of the performers—Rhoads, Meghann Wilkinson and Kim Goldman of Lucky Plush, along with Heck and Adrian Danzig (Leslie’s husband and co-founder of 500 Clown)—make the show immensely likeable and completely engrossing. Episodes of adagio partnering between Rhoads and Danzig, who play the married couple, work like little physical arias, repeating themes based on intimacy and trust and oh-so-gradually evolving with each iteration. Danzig’s progression from his good-natured self into a hot-tempered, somewhat threatening character is so natural it feels less like witnessing a transformation than getting to know a side of a person you didn’t realize was there. To give away any of the delightful physical moments would be a crime, but I will say that there’s a scene with an imaginary staircase that’s worth the ticket price alone.

“The Better Half” has won a National Dance Project Award, so it will fortuitously enjoy a touring life beyond an unorthodox two-weekend run at the MCA. You have two weekends to catch this one, and you should do so. “The Better Half” looks at how we understand our lives as narratives—how we write them, how they feel written for us.