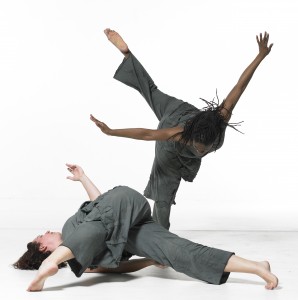 Rachel Damon’s project for four dancers, a year in the making with help from a Chicago Dancemakers Forum grant, begins simply enough: a greeting in one-word phrases to the audience (small; capacity is about twenty-five), then Damon and Ni’Ja Whitson roll two of three six-foot square walls to opposite sides of the stage. Behind them is Adriana Durant—dressed, as is the whole cast, in grey with three brown leather belts around the hips—who proceeds to quietly explore short movement phrases to a soundscape of water and wind, mixed live by Russell Weiss. She is soon joined by the compelling Marc Macaranas and the phrases grow longer, broader, more florid. Concepts of echo and amplification are introduced. As the piece unfolds, however, the echo becomes muddied, the message lost in the clamor.

According to the program notes, Damon conceived “Factor Ricochet” as an investigation of how we embody gender, explored via a rigorous process of improvisation and feedback. Damon enlisted the help of Kristina Fluty to coach movement through the deeply subtle, subjective lenses of Authentic Movement, Feldenkrais Method and Contact Improvisation. Collegial input was sought throughout the year; the acknowledgements include a lengthy list of major players in Chicago’s indie contemporary dance scene. Yet despite the wealth of time and talent invested in the project, a good deal of work remains to be done.

Many sections of “Factor Ricochet,” each delineated by a repositioning of the grey-blue walls, feel aimless or redundant—always a danger with improv-based work. The occurrences of pantomime are particularly problematic; one or two are explored with notable intent, but several feel randomly or artificially thrown in, not gelling with or threading into the dancier phrases. More troubling still is Damon’s solo section. In the program notes, she admittedly presents “moments of hiding, and of armor,” but I found myself quietly begging for Damon to step out of self-consciousness and premeditation and to embrace the vulnerability requisite for the type of genuine self-discovery this work hinges on.

This isn’t to say “Factor Ricochet” doesn’t have its moments. In one section Macaranas solos at the center of the stage while two of the walls circle him like electrons around a nucleus. One can feel his energy pinging off the panels, creating an intensifying energy field. There’s even an instance of Contact Improv—an exercise that normally should not be put before a paying audience unless that audience is invited to roll around too—of such sweetness as to be quite disarming. Ultimately though, the piece feels stuck in its academic premise, still a work in progress. (Sharon Hoyer)