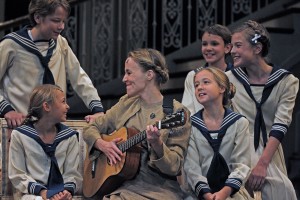 “The Sound of Music” is one of the most often performed, and often one of the most poorly performed, musical-theater properties out there. Most productions simply ride the coattails of the movie’s immense popularity and employ a spunky guitar-slinging Maria and a gang of saccharine-sweet children. It was enough to make one critic infamously dub the property as “The Sound of Mucus.”

Well, not this time. Drury Lane and director/choreographer Rachel Rockwell are giving us a complete rethinking of the work that is such a fresh take, our level of involvement becomes such that an all-too-familiar show really does become a new experience.

From the moment we meet the nuns, they seem like, well, nuns, but not of the buffoonish “Nunsense” or “Late Nite Catechism” variety. Mother Abbess, gloriously portrayed by Patti Cohenour, who played the role in the 1998 Broadway revival, is a gem and when she sings “Climb Ev’ry Mountain,” it really comes across as loving and wise advice from the heart of the character, not just an excuse for an operatic anthem.

The children, too, are refreshingly authentic and though they can dance and sing, when they do it comes across as extensions of their personalities, which are remarkably differentiated. Yes, the writing was always there for that to be the case, but in most productions, these roles are squandered on generic cuteness. 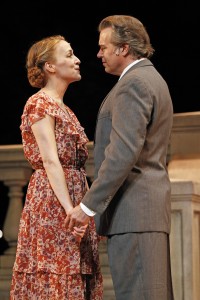 And then there’s Maria, originally created on Broadway by Mary Martin—by then an elderly music-theater matron whose iconic status seeped over into her portrayal—or the seemingly all too practically-perfect-in-every-way movie incarnation of Julie Andrews in her first film after winning an Oscar as another nanny, “Mary Poppins.”

Rarely has Maria been portrayed as a flesh-and-blood character of unmolded imperfection that makes a journey from confused young girl to a woman standing beside her newly found love in a crisis, but here, that full trajectory is convincingly made thanks to the remarkable performance of Jennifer Blood. She not only can sing these familiar songs as if she is really doing so as an extension of Maria’s own personality, she actually seems initially awkward with her nanny role and the children that are suddenly left in her care.

The difference between her and the Captain—played by veteran Larry Adams—is that Maria is willing to tune in to the children on their own terms while the Captain is merely going through the motions of living a life that no longer has meaning until he starts to see his children through Maria’s eyes.

And then there are Nazis, an element that is usually blunted in most productions, or treated in a stereotypical way of their being such obvious and overdrawn bad guys from the moment that we meet them that they are almost caricatures. Here, they are your friends, your neighbors—even the boy next door—and none of that is telegraphed, which makes that discovery all the more chilling. And when it is too late, wow, is it too late. There has always been a powerful moral to the von Trapp story that silence is enabling and yikes, does that effectively come through in this production. (Dennis Polkow)