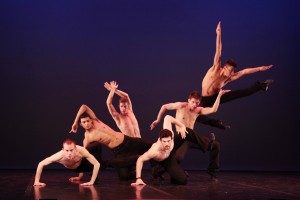 As the name professes, this all-male ensemble has street cred aplenty, especially on the major thoroughfares of Broadway and Hollywood Boulevard. Flashy moves and flawless technique have earned the Bad Boys accolades from across the high-profile entertainment spectrum, from competitive TV dance shows to Carnegie Hall, sharing bills with the likes of Lady Gaga and Elton John. Dance numbers packed with sky-high grand jetes, ear-smacking leg extensions, perpetual fuetes and aerial cartwheels elicit oohs, ahs and woots from the audience in a choreographic style that blends ballet, hip-hop and jazz vocabularies into a power-pop slang. The company was created in 2007 by thirty-year-old Rasta Thomas, who has danced with numerous renowned—and button-downed—ballet companies including American Ballet Theatre, Lar Lubovitch and Chicago’s Joffrey. Thomas wants to get more people interested in dance and isn’t afraid to play up the sex factor, alongside the wow factor, to do so. Bigger, stronger, faster, the Bad Boys bring ballet technique to the stage with all-American punchiness and flash. (Sharon Hoyer)