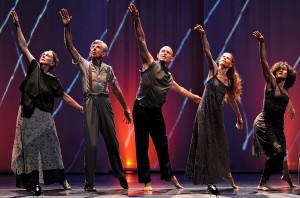 The terms investigation, exploration and research show up a lot in artist statements and program notes these days, but few artists use the words as comprehensively as Liz Lerman, former artistic director of the DC-based Dance Exchange. Lerman’s enthusiastic curiosity has led her to collaborate with numerous minds in the fields of science and academics as well as the arts, creating performances around topics as diverse as genetics, immigration, death, spirituality, Reaganomics, the Nuremberg Trials and the Underground Railroad. Lerman’s talent for uncovering how specialized fields intersect in dance springs from a very direct inclusiveness in her work that takes in the five generations of dancers represented in Dance Exchange and, particularly in the case of “The Matter of Origins” (playing as part of the Chicago Humanities Festival), her audiences.

“The Matter of Origins” explores physics and human theories about the beginning of time in two acts: the first is a traditional stage performance that includes massive projections of images like Marie Curie’s lab and the Large Hadron Collider at CERN; the second is a tea party with chocolate cake (Lerman got Edith Warner’s recipe, the woman who served lunch to J. Robert Oppenheimer and the scientists at Los Alamos while they were developing the nuclear bomb). The audience sits at round tables with local scientists and “provocateurs,” who help guide the conversation.

Can you tell me about the structure of the show? How did you originally perceive the change of location? There were two confluent ideas: One was watching the trend of post-performance discussions. While I was a big proponent of engaging the audience early in my career, I was beginning to feel these discussions were more of the audience having to listen after they’d already sat through however long the pieces were. I started to question other ways we could engage the audience. The second was that I was reading “American Prometheus” about Oppenheimer and came across the part about the woman he had hired to feed the physicists. At that time I was working on a piece about genetics and I knew how exciting it is to talk with scientists. In a flash I had the idea that we have to put audiences with scientists to further discussion.

Do the provocateurs have a scripted set of discussion points?
We have suggested a range of things they can do, but we encourage them to provoke their table. Some have gone way off in other directions. I have this sense that people come to live performance, they can have a longer and richer experience if given the chance to reexamine it. One of the provocateurs from our premiere, a guy from the National Academy of Sciences, took email addresses from his table. One person wrote him the next day saying, “I can’t stop thinking about this.” He forwarded it to me and said, “Liz, anyone that can keep people thinking about these ideas for a day… it’s fantastic.” And it’s not just science, it’s dance, it’s art.

It’s a big subject…THE big subject you’re dealing with. What inspired you to create a piece about the origins of the universe?
One way I like to think about it is not that these are huge questions, but that these are enduring questions. As children we have memories of first asking, “Where did this all come from?” It wasn’t so much that I was drawn to the origins of the universe, as that so many people in so many fields wonder about it: religious people, scientists at CERN, scientists at Hubble. From the tiniest cell to the biggest idea in the universe, they wonder about it. I love that. And then there’s a simpler version of the answer: that there are many beginnings. You can look at Los Alamos as a beginning of CERN. It’s the first of the big science, big government projects. You can say Los Alamos didn’t just create the bomb, it created a lot of things.

It’s not a phase in our technological history that’s considered entirely positive. There’s a pretty deep ambivalence about the creation of nuclear energy and how it was used.
Yes, I’m quite purposeful about people having a chance to think about it. Not all of my physicist partners like that. Some have completely embraced it and some wish I would leave it alone. My take is that I don’t think it’s solely the scientists’ responsibility to think about it. It’s part of all of our history and it’s all of our responsibilities to think about it. When we first performed this for students at the University of Maryland, when the question of Los Alamos was posed, a lot of students didn’t know what it was. Those who did, when the question was posed: “Do you think anything secret like that is going on now?” almost all the students said absolutely not. There are no secrets anymore.

That’s terrifying.
This is one of our dilemmas in the art world and giving people the chance to think about things. I was fascinated.

How many scientists did you work with creating the project?
Quite a few. It began with Gordon Kane, who will be coming as part of the Chicago Humanities Festival. He saw a version of the genetics piece and came up to me and said, “Okay, we want one.” He arranged for my first trip to CERN. This was before they pushed the button, so we got to dance in the tunnel. It was unbelievable. Scientists love talking about what they do. Each place we take the piece there is more engagement. One of the nice things about these crossover projects is that there is so much mutual learning and investigation. After these encounters, each person goes back to their respective laboratory more brave, more engaged, more excited.

Did you make any surprising discoveries of your own during this project?
One of the interesting things I came across in the intersection of dance and science is the Heisenberg Theory: that if you’re measuring velocity, you can’t accurately find position and vice versa. I found it a beautiful way to get dancers moving. In my experience there are momentum dancers and there are shape dancers and it’s very hard to find someone who can do both. It’s a wonderful thing to stumble into, to find science corroborate something I’d noticed but from a completely different point of view.