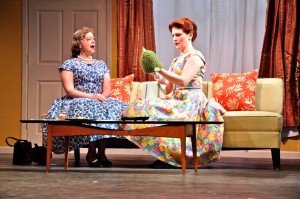 In our hyperkinetic, digital world, it’s no wonder that we’re turning desperately to Don Draper & Co. to sate our nostalgia for simpler times. At first blush, it’s that kind of longing that Jordan Harrison’s play studies. But while “Mad Men” has a naturalistic model that subtly uncovers the realities of the mid-twentieth century, the play mainly traffics in broad statements about race and sexuality that aren’t so much explored as presented without question. A discontented modern woman decides to join a small group (one might say cult) that reproduces the society of 1955. Katha (Molly Glynn) forsakes her smartphone for a cookbook, and her Japanese-American husband Ryu (Peter Sipla) trades his doctor’s scrubs in for quaint Midwestern racism. The question of “authenticity” to the times is a bottomless well for jokes, as is the idea of people using “safe words” whenever they feel so burdened by their life choice that they desperately need to refer to the modern, outside world. But just as the insular society slowly crumbles, so does the play’s premise, which only troubles your sense of the present moment, rather than informing it. (Neal Ryan Shaw)