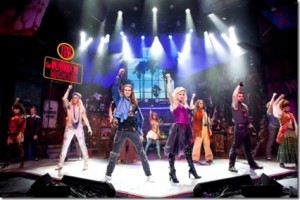 OK, I’ll admit it. In the eighties, I rocked the Acqua Net; I worked the spandex pants until the pants begged for mercy. But this musical ode to the era of excess is less than totally rad. Fer sher.

Sherrie (Shannon Mullen) heads to 1980s Los Angeles to “make it.” Drew (Dominique Scott) gets her a job at The Bourbon Room, a heavy metal haven threatened by developers. There are romantic hits and misses as Drew pursues his dreams and Sherrie gets involved with narcissistic rock god Stacee Jaxx (Matt Nolan).

It isn’t anything musical fans haven’t seen before and the ironic commentary doesn’t make the book any stronger. It all just feels like a lot of work; there’s a great deal of strained vocals and muddy choreography. The music’s great, but it’s only snippets of hits; just as the audience tries to join in, the show gallops on to the next moldy FM chestnut. Gag me. (Lisa Buscani)