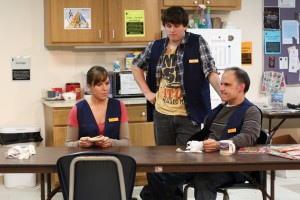 In this cynical world, faith costs. When faith is all you have, the cost doesn’t seem too high. LiveWire’s latest takes an unflinching look at the price of belief, suggesting that you win if you can just believe in something.

Will (Tom Hickey) hires on at a big-box store to be closer to Alex (Jackson Challinor),the son he abandoned; it’s not a joyful reunion. But Will presses to know him, alienating Alex’s stepbrother Leroy (the darkly hilarious Brian Rad), no-nonsense manager Pauline (Allison Cain) and flighty ne’er-do-well cashier Anna (Faith Hurley).

Samuel D. Hunter’s script never sells out; each character is equally likeable and loathsome. Will is a tragic figure until we learn his role in his tragedy;  Alex is bitter and prone to panic attacks. Hunter insists we root for them both. The ending is bit unfocused, but you’re left with lots to think on. (Lisa Buscani)