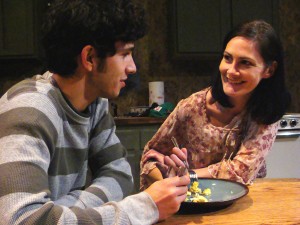 Ringo sang “I get by with a little help from my friends,” but the characters in Dierdre O’Connor’s new play aren’t so lucky. Anne (Stacy Stoltz) is a somewhat frumpy librarian still living with her mother, who bit her last home care provider. So she hires Levi (Jordan Stacey), a young former alcoholic, who is sorely underqualified but desperate for a job and a place to belong. Things seem fine until mom breaks her hip on Levi’s watch, and Anne’s brother Jimmy (Layne Manzer), a perpetual screw-up, starts feeling left out of the picture. Yet he’s hardly in a position to help, with his dead-end restaurant job and pregnant girlfriend Christina (Shannon Hollander). O’Connor subtly amasses more and more problems under this single roof, and yet the play isn’t a weepy. Plenty of awkward moments that aren’t dramatic are instead hilarious, thanks to the sharp direction by Joe Jahraus and his level-headed cast. Profiles took a risk by showing a softer side here, and it paid off. (Neal Ryan Shaw)