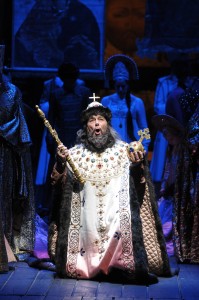 “Boris Godunov” is making a return appearance to Lyric Opera for the first time in some seventeen years, a long time to go without hearing the crown jewel of Russian opera. What is needed to make it work is a bass extraordinaire who doesn’t come around all that often. Lyric had to wait its turn to obtain the services of Italian bass Ferruccio Furlanetto, who is making his Lyric debut with this role.

One could quibble about the size and color of the voice, which is not the dark timbre often associated with classic performances of the tortured czar. But the nuances of Furlanetto’s characterization are profound and the shading of his voice expressive of the myriad of moods that need to be conveyed. Making a splendid contrast with Furlanetto is the darker sound of Italian bass Andrea Silvestrelli as Pimen.

This is a remount of the 1994 production originally created for Samuel Ramey, a staging of the inferior, truncated 1869 version of the opera, which eliminates some of the work’s best moments, including the entire “Polish” act, but has some longer sections in the Kremlin scenes that Mussorgsky later cut more efficiently. With no love interest, it makes for a rather short evening for tenor Erik Nelson Werner’s Grigori—who did shine nonetheless—and eliminates completely the work’s central female character.

The most distracting element of this production is the narrative device of using the Holy Fool (tenor Edward Mout) as a full-time character silently observing the action, which obliterates the point of the opera’s climax. The unit set spotlights a drab, slanting gray monolith with trap doors used for scene changes.

The chorus plays such a pivotal role in the opera that it’s a pity no Lyric performance of the work occurred during the reign of chorus master extraordinaire Donald Palumbo—whom the Met spirited away from Lyric a few seasons back—nor his successor Donald Nally, who gave up the post last season. Instead, an interim choral director took on the task, admirably in terms of ensembling and balance, by and large; but the chorus suffers from a real sameness of dynamic palette that does not adequately correspond to the emotions the chorus is supposed to be conveying. The coronation scene on opening night was downright wimpy, the orchestra drowning out the chorus.

This is Sir Andrew Davis’ first ever “Boris,” and while it is obvious he knows the score well, the orchestra often seemed to be playing too loudly. It really seemed as if Davis were wresting the work to a Wagnerian wannabe rather than allowing its own unique sound world to communicate on its own terms. This is the original 1869 version with Mussorgsky’s own orchestrations, which for years were considered so crude that other orchestrations were often used, notably those by Rimsky-Korsakov and Shostakovich. If one is going to do the original as is, fair enough, but it would be preferable to allow it to exude rawness without becoming coarse. (Dennis Polkow)