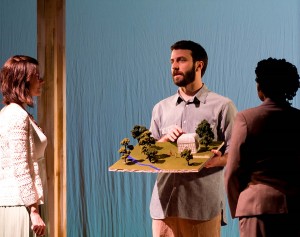 Three siblings (along with their spouses and friends) bicker over what to do with a giant aviary after their father’s death. A sister-in-law wants to turn it into a new house and sell it. A sister wants to convert it into a home for The Church of the Fifth Day, a fledgling bird-infatuated religion founded by her friend that believes “the soul is a bird we keep in our heart.”  And a world-weary brother, who makes a habit of turning to the audience for sympathy, just wants to watch it decay. This is the setup for Adam Bock’s light (and uneven) comedy about faith, love and friendship. Director Peter Cieply’s approach seems a bit too controlled at times, with over-pronunciation and over-choreographed movements stifling some of the stream-of-consciousness humor in Bock’s dialogue. Projected digital backdrops by Michael Fernandez quickly and impressively set up each scene, requiring very limited additional set. John Victor Allen turns in a memorable performance, striking the appropriate balance between earnestness and levity. (Zach Freeman)