by Brian Hieggelke
November 17, 2011Filed under: 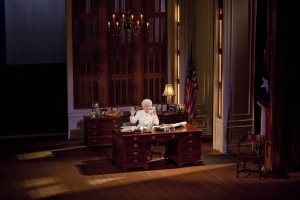 Ann Richards is an unlikely subject for a one-woman show. Texas’ second woman governor (as the show explains), Richards stepped into the national spotlight in 1988 with a rousing keynote speech at the Democratic Convention, where she emerged as a take-no-prisoners leader with an eloquent down-home charisma. But after winning the governorship in 1991, she lost her bid for reelection and fell out of the spotlight, dying of cancer in 2006. Unless you’re from Texas, she’s a diminishing historical footnote.

Nevertheless, the television and film actress Holland Tyler made Richards a personal project, researching the subject for three years before penning and starring in “Ann.” As such, she fully inhabits the late governor’s character as she journeys through her life, from her Texas childhood to her long existence as an alcoholic housewife and her eventual divorce and emergence as a feisty politician. It’s an uncanny portrayal.

The play itself could use a bit of tweaking and trimming. The graduation commencement speech device that frames the show is overly contrived and gets things off to a slow start, and the night can’t seem to find an ending, overstaying its natural denouement by fifteen minutes or so. But the core of the story, a long segment of the governor at her desk, alternately cajoling and charming her subordinates and her kids, is priceless. Ann Richards owes a second life to Taylor. (Brian Hieggelke)

At Bank of America Theatre, 18 West Monroe. Through December 4.