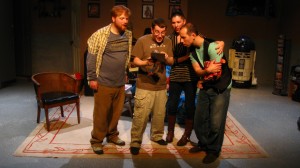 In a Cincinnati basement crowded with Star Wars paraphernalia (eBay must have gotten a workout from set designer Jacob Christopher Green) three lifetime best buds in their late twenties and a shrill girlfriend clumsily conspire to rob a massive collection of valuable toys from “a major fucking corporation here, dude” while avoiding any interaction with an offstage mother who sounds like Adam Sandler. There’s something buried in this tale of nerds run amok about obsession and friendship and seeking a better life, but despite director Dennis Frymire’s occasional attempts to seek deeper meaning, even in the softest moments it’s all too clear that Joseph Zettelmaier’s geeky bromance heist story is little more than escapist comedy/action, with most of the action taking place offstage. The cast attempts to squeeze out every laugh they can from the flippant and periodically funny script, and there are moments of brilliance when they succeed, but there aren’t enough of those moments. (Zach Freeman)