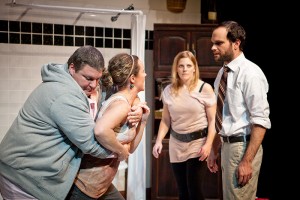 Anna Carini’s play, her first but a remount of SiNNERMAN’s first-season hit, is something of a sentimental juggernaut. Her writing displays a high fidelity to traditional play structure while at the same time attempting to reach a level of emotional honesty difficult to achieve in eighty minutes. The play is set in a bathroom where Amy’s (Cyd Blakewell) separated husband has just attempted suicide. The place is still in disarray when various friends and family come to clean up and make sense of what has happened. It turns out that the husband is a galvanizing figure, and much hard work is made, in true tragic fashion, to show how this one event marks a turning point in these characters’ lives. Although at times cloying, the production features superb acting from the entire cast, in particular Blakewell, who derive convincing action even from the play’s talkier moments. The broken shower rod might serve as a metaphor for the show as a whole; if only our bigger life problems were solved by a trip to Target. (Neal Ryan Shaw)