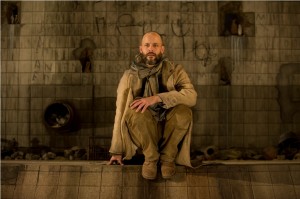 As a high-school freshman, studying the works of Homer—dense, dry and infinitely long as they seemed to be—was the last thing I wanted to be doing. Little did I know at the time, or maybe I just forgot, that Homer didn’t so much write down his epic poems “The Iliad” and “The Odyssey” as he did sing them, improvising and tailoring his performances for whatever crowd he was working. Denis O’Hare’s and Lisa Peterson’s one-person show brings the story of the Trojan War closer to this original, much more entertaining mode. The Poet (Timothy Edward Kane), millennia later, is hiding out in an underground sewer, reluctant to sing the songs again, calling on the Muses for aid. Setting the story mainly as a conflict between the great warriors Hector (of Troy) and Achilles (of Greece) he compares the Trojan soldiers to our boys recruited from every small town in America, and uses road rage to illustrate Hector’s bloodlust in battle. The show is anchored by Kane’s virtuosic solo performance, who tells the story as though he had been at Troy himself. (Neal Ryan Shaw)