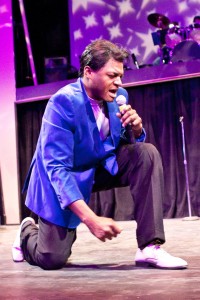 The stakes are high for any theater on opening night, but they were doubly, or triply so for the Black Ensemble Theater this weekend. For not only were they reviving one of their most acclaimed shows, “The Jackie Wilson Story,” but they were sharing the realization of theater founder Jackie Taylor’s dream, the nineteen-million-dollar Black Ensemble Theater Cultural Center, which debuted to the public with this opening. Taylor is a marvel, and this new facility is nothing short of a jaw-dropping accomplishment for her, but the risk at hand was how the particularly singular “Black Ensemble experience” would make the transition from the scrappy basement confines of the Hull House Uptown Center to such relatively upscale surroundings. The answer, phew, is marvelously. Architect John Morris has crafted a building with a perfect mix of showbiz and understatement to stand among the best in Chicago’s theater world. Dionne Warwick (yes, it is her) did the interior design and delivered a perfectly textured finish to the space, with rustic wood paneling and a range of browns, beiges, oranges and purples that simultaneously evokes the theater’s heritage while creating a comforting and classy environment for new audiences. And the theater itself? It’s custom-made for Jackie Taylor’s style of theatricality, with a thrust stage pushing the performers—who make many entrances down the aisles—right into the audience and the band centrally situated in a raised alcove above the stage with a sheer curtain that can be opened and closed to create the effect of bringing the band “up front” when the situation calls for it. If you’ve been to the old space, you’ll feel right at home, albeit in spacious, more comfortable seats and a doubling of the audience from 150 to 299. 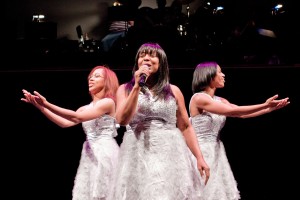 “The Jackie Wilson Story” is the perfect opening show for the new space. Not only is it a creation of Taylor—its writer, producer and director—it arguably put the theater on the road to its current success when it debuted in 2000. It was a smash hit, toured nationally and was a hit in New York,  launching the Broadway career of its star, Chester Gregory. I did not see the original incarnation, so am unencumbered with comparisons of the current Jackie Wilson, Kelvin Roston Jr. to Gregory. But Roston’s a charismatic force, as he has to be for this show to work, with a strong voice (though no match for Jackie Wilson’s legendary pipes) and a dancing physicality that evokes the original “Mr. Excitement,” managing in one scene to execute the splits, repeatedly, while simultaneously singing and bantering with an enraptured audience. The story of Jackie Wilson, as told here, is an all-too-familiar heartbreaking artistic journey, from the hardscrabble streets of Detroit to superstardom, a journey marred by the artist’s problems with himself—booze, drugs and infidelity—and  exploitation at the hands of a record industry, entrenched with organized crime, that routinely ripped off artists. Taylor’s telling is fairly straightforward and chronological; she wisely offsets the many tragic moments in Wilson’s life (he succumbed to a heart attack at forty-one while performing and went into an eight-year coma from which he never emerged) with rousing song and dance numbers. I have some minor quibbles—a set of framing scenes in the hospital while he lies unconscious is contrived and unnecessary, and the band volume overshadows the vocals a couple of times—but the show accomplishes exactly what it intends to, that is bringing Jackie Wilson back to life.

Seeing a show at Black Ensemble is not like any other theatrical experience. The sheer joyous energy brought to bear on stage is met back by an audience that seems to have to restrain itself from rushing up and joining in the celebration. There is nothing corny in this, and authentic joy is a rare emotion to share. Though this particular story, with its downward trajectories, can’t help but temper that element somewhat, it is still there, right now, as the entire house shares in the larger joy of the music, the show and the accomplishment of Jackie Taylor. (Brian Hieggelke)