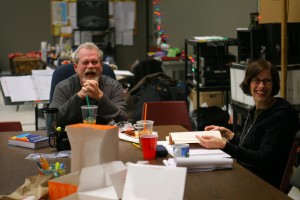 This week, Ebenezer Scrooge, Bob Cratchit, and Tiny Tim took the stage in the Goodman Theatre’s thirty-fourth annual production of “A Christmas Carol.” Veteran director Steve Scott, who last presented the show in 1992, reimagines Charles Dickens’ classic story with new special effects, music and choreography. We recently caught up with Scott, who also serves as the Goodman Theatre’s associate producer and has directed nearly 200 plays in Chicago.

How is this year’s production different from previous years? One of the reasons I wanted to do the show again is that “A Christmas Carol” has so many elements. It’s an emotional roller coaster for the audience. This year, we tried to make the scary moments scarier and the funny moments funnier, just to make that roller coaster a little more thrilling and exciting. We have some great new special effects surrounding the Marley scene, when he first appears to Scrooge, and we are trying a couple of new things with the ghost of Christmas past.

What are some of the challenges of staging a show more than once?
With “A Christmas Carol” there are a number of challenges, because you want to preserve the things in the show that audiences have grown to know and love while adding some of your own ideas into the mix. In a way, you’re not only collaborating with the people you’re working with; you’re also collaborating with all the people who have contributed to the production in the past. 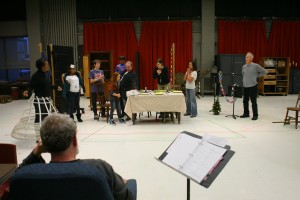 People come back to see “A Christmas Carol” year after year. Why do you think the show—and Dickens’ story—appeals to audiences?
The story contains a lot of different elements that appeal to a lot of different kinds of audiences. But ultimately I think the thing that draws people back is that we all identify with the character of Scrooge, and the journey that he takes over the course of the story. Especially at Christmas time, when you’re feeling overwhelmed or cynical about the commercialism of the holidays, it’s easy to lose sight of what Christmas is all about, which is coming together with family and friends and reestablishing all those links with the world around you. It’s a wonderful message for people to see and experience.

“A Christmas Carol” is about economic disparities. The main character, Ebenezer Scrooge, is a rich man who learns to feel compassion for less fortunate people. Does the story have special resonance in difficult economic times?
Very much so. I think that’s another brilliant thing about this production. Certain themes in the story are always relevant, but in 2011, the story really does reflect a lot of what we’re going through economically. One of my cast members was saying yesterday that Scrooge is part of the one percent who has all the wealth, and everyone else in the cast is part of the ninety-nine percent. Scrooge becomes a Warren Buffett character who realizes that he wants to help the people around him. There’s a lot of resonance, and I’ve encouraged the cast to think about links between their characters and their own lives. Because actors very much understand what it’s like to have to struggle to make ends meet, to make a living and to support families, so they identify with the characters that they’re playing. It’s a pretty valuable political play for our times.

What’s your favorite thing about this production? What do you think audiences will love?
Audiences do like the scary moments. But I think they love the celebratory moments, the big party that young Scrooge goes to at the Fezziwig house, the Cratchit’s celebrations, I think those resonate especially. And some of the references that the script makes to all of us being “fellow passengers to the grave.” But ultimately it’s a very comforting story because it shows us that no matter what we have become in our lives, we have a chance to go through some salvation, for lack of a better word, and really become what we would like to be. This is the time of year that we do that. And watching the show with other people, in a theater, makes it a communal celebration, which I think is why the theater productions have been so successful.