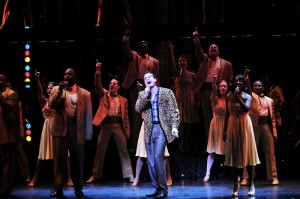 The newly launched national touring production of “Memphis” that has landed in town for a short run features such dazzling choreography from Sergio Trujillo and such a hard-working and energetic cast that it almost makes you forget what a mediocre show it actually is. Almost. Basically a dishwater “Dreamgirls,” the premise is much the same: that during the days of segregation, white artists were derivative and took everything from more innovative black artists. (Odd though, to attempt to make that point by offering a sappy parody of Perry Como, of all people, a true original of his own.) The “hero” in this case is a white deejay (Bryan Fenkart) who “discovers” and then falls in love with a young black female singer that he makes a star (Felicia Boswell) and then vigorously protects and defends against the racism of the day, including a climactic Act I finale of an onstage attack where you can see the rubber recoil of the bat. There is even an unlikely Mama Rose-like gospel moment for the deejay’s white mother (Happy McPartlin) as she comes to accept her son’s biracial relationship, circa the mid-1950s.

Leaving aside the messianic only-white-people-can-solve-problems-for-black-people message of this show, the most absurd irony is the music itself: far from being representative of the inventive black music of the day, it really comes across as well, generic, even by white music standards of the day. (The show’s composer is Bon Jovi songwriter and keyboardist David Bryan.) There is little memorable here melodically, and the lyrics are chatty and cumbersome. One song actually begins with “Now I didn’t mean to call you a redneck-son-of-a-bitch,” not just once, but twice. Oy. Dramatically, too, we never get to know these characters well enough as individuals to buy that this unlikely couple is in love, and therefore we have no emotional investment in what happens to them.

That leaves the dance element, which is indeed quite well done, assuming that this aspect being imaginative and well done is enough entertainment for the evening. Despite the quality and high energy of this component, the overall experience nonetheless felt woefully wanting. (Dennis Polkow)