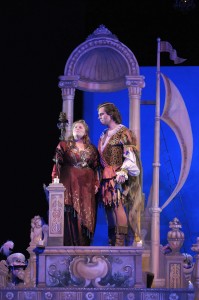 During the recently ended Bill Mason era at Lyric Opera, the philosophy was that works of Richard Wagner and Richard Strauss had to alternate for attention to contain costs of the huge orchestra needed for these works. This year, however, the Strauss opera presented, “Ariadne auf Naxos,” employs a chamber orchestra, yet nonetheless was left to stand as the single season ambassador to represent the vast canvas of German Romanticism.

This production was originally mounted for soprano Deborah Voigt, who had sung the role here in 1998 and was to have sung this revival, “Ariadne” being one of her signature roles. However, soon after a Chicago Symphony concert over the summer spotlighting Strauss and Wagner roles associated with her where Voigt was having obvious vocal trouble, she abruptly withdrew from these performances with a statement that she was “focusing increasingly on dramatic soprano roles and thus has decided to drop the part from [her] repertory for the time being.” Not helping matters was that Voigt had overbooked herself to have the Lyric “Ariadne” be sandwiched between her Brünnhilde role debuts in “Siegfried” and “Götterdämmerung” at the Met, no less.

Given that Lyric music director Sir Andrew Davis had conducted an “Ariadne” at the Canadian Opera Company last spring where rising soprano and Ryan Center alumna Amber Wagner had suddenly and successfully stepped in for an ailing colleague with twenty-four-hours notice, it seemed a natural fit to have Wagner step in for Voigt at Lyric. In terms of Wagner’s voice, the fit is a solid one, to be sure, despite considerable caution on opening night. It is obvious that Richard Strauss will have a big role in her future. But dramatically, this is a role not particularly suited to Wagner at this point. When she sang her role debut as Elsa in last season’s production of Wagner’s “Lohengrin” with Johan Botha—also under Davis—that was a role that was dramatically better suited to what is essentially a rather sheepish and static stage presence at the moment. But you cannot effectively bring off the role of a prima donna playing a Greek heroine in the same opera when your acting is such that neither role has much credibility. 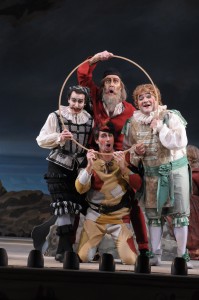 Of the three female leads, that left English mezzo-soprano Alice Coote as the most memorable portrayal of the evening: pity it was the one role that is only heard in the work’s “Prologue” rather than the “Opera” itself. Coote offered both a beautiful and smooth dark timbre as the trouser role of the Composer that nonetheless made the role’s high notes sound organic and passionately yet hopelessly holding to the aesthetic ideals that the frustrated Composer is attempting to get across to a troupe deaf to his vision.

The big climax of the work where Ariadne meets her true love Bacchus was not helped by the fact that Wagner and tenor Brandon Jovanovich had virtually no chemistry, at least on opening night, and that Jovanovich seemed to be ill-timingly running out of steam in terms of energy and timbre, Wagner’s voice smothering his at key duet moments.

Robert Perdziola’s sets and costumes are as glorious as they were thirteen years ago, and director John Cox really plays up the comedy in this fascinating frame-within-a-frame work of an opera within an opera where a Viennese patron sets in motion comedic chaos by announcing that the post-supper tragic opera and comedic play will now be performed together so that the fireworks can start promptly at 9pm.

The many smaller and vocally difficult parts of the opera were in excellent hands and Davis struck the ideal balance between the small orchestra and the singing, able to scale back to almost Mozartean transparency when needed, yet managing to achieve luxurious sonority suggestive of the huge orchestras usually required for works of Strauss. (Dennis Polkow)