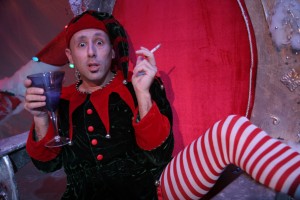 When Mitchell Fain breezes into the theater encouraging everyone in the audience to join him in a round of shots, it becomes pretty clear right off the bat that this will not be your typical heartwarming holiday story. Fain, standing in for satirist David Sedaris, may be a little jaded, but “A Christmas Carol” this is not. Indeed, the way he tells it, you sort of wonder why he wasn’t drunk the whole time he desperately took a job as an elf in the New York Macy’s Santaland. Fain conveys Sedaris’ wry humor effortlessly, occasionally peppering the twenty-year-old text with updated references to Penn State, Justin Bieber and one of the Kardashians (whichever one had the baby). These punctuations don’t take away, however, from the stories of a bait-and-switch involving Cher and politically correct Santas. The show has a poignant, sober ending befitting its public-radio roots, but it’s fun enough to take the edge off another holiday season for the SAD-inflicted among us. (Neal Ryan Shaw)