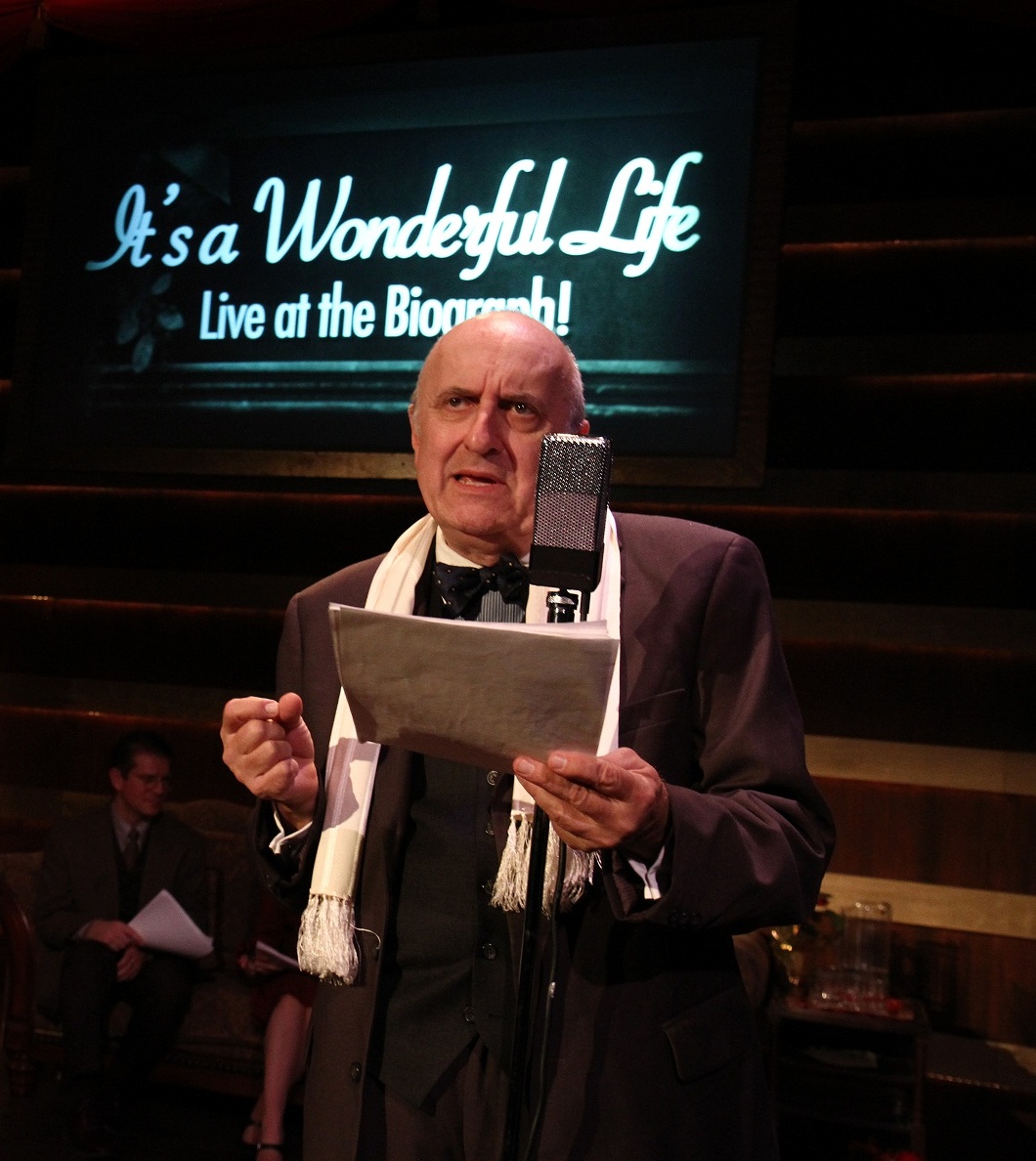 Actor John Mohrlein is, by all appearances, a gentle man. His red-frame glasses and black derby hat tell me that. His charming laugh confirms it. Really, it’s more like a giggle that springs from a mind delighted with discovery. We get comfortable in a booth at Clarke’s Diner on Lincoln Avenue. Hat and glasses come off, coffee is poured, a little cream and sugar are added. Just as we settle into our conversation, Chuck Berry’s “Johnny B. Goode” spills out of the diner’s speakers. Mohrlein pauses a moment and cocks an ear. “I love Johnny B. Goode,” he says. “It’s my theme song.”

For ten years now, Mohrlein has performed both the good and the bad as Clarence and Mr. Potter in American Blues Theater’s warm, inviting production of “It’s a Wonderful Life: Live at the Biograph!”  Mr. Potter, most everybody knows, is the “warped, frustrated old man” who taunts, tempts and torments uber-mensch George Bailey in an effort to wrest from him control of the Bailey Building and Loan. Clarence is the easily flustered guardian angel who helps convince George that it’s a wonderful life after all. Mr. Potter ranks number six on the American Film Institute’s list of the fifty greatest movie villains (Hannibal “the Cannibal” Lecter ranks first). Take that, Mr. Scrooge.

“I’ve only seen that movie a couple of times,” admits Mohrlein. “It’s such a simple story, but man, it just destroys people. It really does.” He goes on to say, “I can’t quite put my finger on it. I don‘t think I ever will either. If I did, it wouldn’t be any fun.”

The show’s director Marty Higginbotham recently shared with me in an email, “Anyone who thinks of ‘It’s a Wonderful Life’ as just a sentimental holiday movie has not truly heard this story. And they certainly have not seen or heard John Mohrlein’s Potter and Clarence.”

I caught the show during previews, and Mohrlein’s adept performance reminded me of the devil-on-one-shoulder, angel-on-the-other routine one often sees in cartoons. Mohrlein speaks out of both sides of his mouth, as it were, and he makes it look easy. One can’t help but agree with Higginbotham’s assessment that “in [Mohrlein’s] hands both of these characters are fully fleshed out, distinct, and a joy to experience.”

ABT keeps the story fresh by presenting it as a live radio-play broadcast in 1944. The cast performs as radio actors dramatizing at the mikes for a make-believe audience at home and a studio audience in house (loosened up by sing-along Christmas carols and coached by an electronic “On Air/Applause” sign).  “That’s part of the mystique,” reflects Mohrlein. “It’s a hyper-real experience for the audience. We act when we’re up there. I intentionally don’t memorize it [the script] at all. I have to refer to it. It helps me. It also evokes a certain kind of creative energy.”

Staging “It’s a Wonderful Life” in this way creates openings for spontaneity and improvisation within a narrative that is all too familiar. “Every performance has a different tone. The audience is always different. Sometimes you act to them or you go through the microphone. A lot of people think it is really a radio show.” He adds, “It’s always new. I am sort of dumbfounded that I’m not bored. I don’t take it for granted. I think a lot of that has to do with the involvement of the company itself. We’re all very supportive of each other. And that kind of energy makes it a whole different thing. Nobody else is going to do it the way we do it. This is an original.”

I ask Mohrlein if it is a challenge to manage the quick change between airy goodness and dyspeptic evil. “It’s not a challenge, really, if the characters have a value. I mean, no character is all good or all bad.” Of course, an actor portraying Mr. Potter on the radio would not have had recourse to the visual cues that made Lionel Barrymore’s performance in the film so memorable—the wheelchair, for example, or the lackey who pushed it. “In the film [Potter] can focus that frustration and anger on the servant. It heightens his malevolence by seeing what’s happening to the poor slob behind him, which relates to all the other people in town.”

On a few occasions during the play, Mohrlein must execute an instantaneous vocal shift between the bitter, venomous wheeze of Mr. Potter and the twinkling, wide-eyed (if not ever-so-slightly doddering) sincerity of Clarence. He must manage quick changes of posture and mannerism as well. The devil is, after all, in the details. “I always fancied [Potter] wearing a pince-nez, maybe twiddling it like this.” He rolls his fingers together. “But then it turned into this grasping thing.” He slides his thumb over his forefinger as though he were rubbing a coin. “Where does that come from? I’ve probably heard George Bailey say that one line, ‘You’re talking about something you can’t get your fingers on.’ There’s always that kind of grasping, manipulating, especially with the index finger. Cues like that spring from the text.” 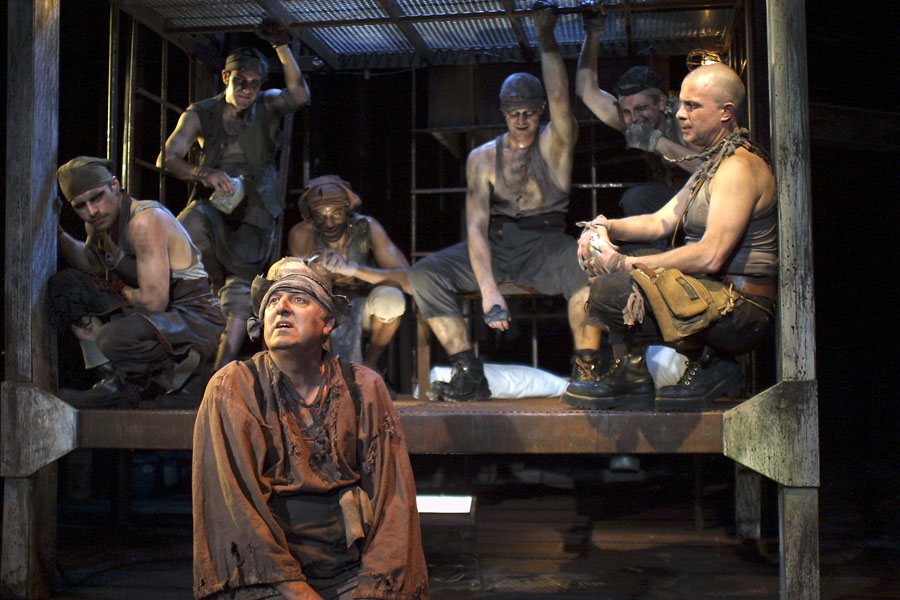 Mohrlein in an ABT production of “The Hairy Ape”

Mohrlein has long been active in the Chicago theater community. “I was the first graduate of the Loyola theater program,” he says. He taught theater at Providence St. Mel High School in East Garfield Park the year Black Panther Fred Hampton was killed. After deciding that teaching didn’t suit him, he went on to accumulate an extensive list of theater, television and film credits. He joined the American Blues Theater Ensemble in 1997. “I wasn’t a member of the ensemble when I did ‘A Stone Carver’ [a performance that earned him an After Dark Award for Outstanding Performance and a Jeff Award nomination for Best Actor] but I got lucky. That show had all the elements that make American Blues Theater tick.” A moment later he clarifies, “You grab really good works, texts and you apply your people to it, and if you’re lucky, something like ‘It’s a Wonderful Life’ emerges.”

A few years ago, Mohrlein directed American Blues Theater’s adaption of “Catch-22.” “That’s another good example of working with the words,” he says. “The show was full of imagination, and all of it was conjured from the group. It was truly a collaborative effort.”

He is full of praise for his fellow “It’s a Wonderful Life” actors and ABT Ensemble members. “You couldn’t get a better bunch of people. It’s a real privilege to be involved with them, and to know you’re welcome, that you’re part of it.” He continues, “That’s what the Ensemble has striven for from the beginning. And they’ve been faithful to it, to themselves. ‘To thy own self  be true.’ Is that a quote from Twain?” he cracks in reference to a line Clarence delivers. “I would say we’ve got a great future. Wendy [Gwendolyn Whiteside, the actress who portrays Mary Bailey and is ABT’s Producing Artistic Director] is doing a lot of great work guiding, stirring the water, getting things to happen. It’s not easy.”

When he is not acting, Mohrlein still creates as a visual artist and engineer. He is a man of many talents who seems to have a keen interest in the raw materials of creation, linguistic or otherwise. A sculptor, he creates metal panel installations for architects, designers and other clients. “A lot of what I do is metal etching. I etch with acids, chisels and stuff like that. I’m doing something now using zinc and tin coated copper. It’s interesting material.” 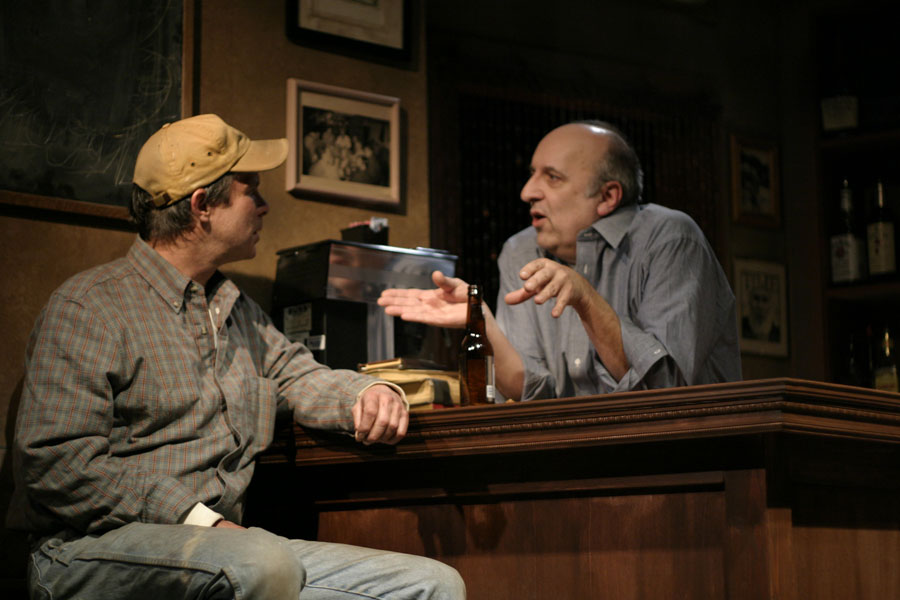 He has done some impressive engineering work over the years as well, but he modestly declines to say much about it. He seems to have inherited his mechanical talents from his father, a German immigrant who came to the United States aboard a cattle boat and worked for a time at the Rock-Ola Manufacturing Corporation, makers of pinball machines and jukeboxes. “My old man lost everything in the run in 1929,” Mohrlein tells me. “He had accumulated quite a lot of money, and he had it in the Citizens Bank. That is something that informed me about Tom [a character who demands that George Bailey return his deposit in full when the Building and Loan experiences a panic]. It was always in [my father’s] head.”

Mohrlein laughs when I suggest he is a renaissance man. “I hope so. It’s the only way I can keep my head on me. I’ve got a lot of ideas, and I like to implement them.” He draws clear parallels between his work as an actor and his work as a visual artist. “You’ve got to be bold and approach the opposites, not necessarily do the opposites. That’s where the ideas come from.”

Behind us and above, the speakers of Clarke’s Diner bring to a close “The Great Pretender” and open up Donovan’s “There is a Mountain.” It’s a bouncy tune. “What a wonderful life,” Mohrlein reflects, then “Hey! Did you hear what I just said?” He laughs. “The best part of that show is when Clarence says, ‘Don’t you see? You really had a wonderful life.’ It gets me all choked up.”