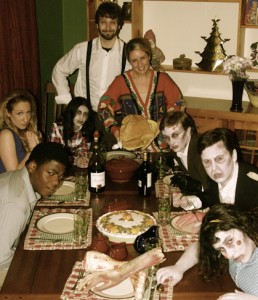 Over the last several years, we’ve watched helplessly as zombies have run (or stumbled, I guess) rampant through television, film and even classic novels that we thought were safe (check out “Pride and Prejudice and Zombies”). But director Chad Wise (co-writing with Sean Harklerode) thinks it’s about time zombies made their way to the Christmas dinner table. And for the opening ten minutes of this sketchy mashup of the original “Night of the Living Dead” with everything Christmas, it seems like maybe it could work. Timid Barbara (Andria Emerick, with some show-stealing physical comedy early on) is bringing her stalwart new boyfriend Ben (David Guy) home for Christmas to meet the family, when a stop at the cemetery to drop off some flowers turns deadly, zombie-style. As Barbara and Ben hole up in an empty house, their exchanges are rife with subtle comedy and solid parody, but the story loses steam as the rest of the family appears. Zombies around a dinner table is a clever image and Josh Razavi is excellent as a giant snowman narrator, but even Christmas cheer can’t keep this show from dragging its zombie feet. (Zach Freeman)