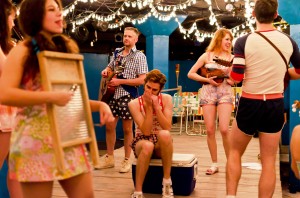 The Hypocrites haven’t simply reimagined this Gilbert & Sullivan classic; they’ve wholeheartedly re-appropriated it, paring its grandiosity down to a much more streamlined, folksier scale. Light-opera purists might scoff at the idea of putting the Major General in Big Bird slippers or introducing the daughters by having them sing “Milkshake,” but those people would be forgetting that G&S had a sense of humor in their own time. You’re free to share the beach cooler and tiki torch stage with the performers as they enact the story of a group of pirates falling in love with the lovely daughters of a military man, but know you’re at a higher risk of being bumped from your bench more than once or having a singer bellowing right in your ear. Sean Graney’s fluid, often aggressive staging will indeed often force you to move, never letting you settle your view on this Victorian classic. (Neal Ryan Shaw)