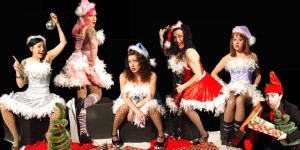 Chicago is lousy with holiday shows. Want to see the “Christmas Carol?” Choose from six different versions. Or if your fancy is the “Nutcracker,” there are three of those. Not to mention three takes on “It’s A Wonderful Life.” It’s gotten to the point that almost every theater in town is putting on some kind of holiday-themed show. And almost every show, no matter if it’s a comedy poking fun at the holidays or a dramatic original, still falls  into the category of traditional holiday theater with themes of a heart-warming character.

But a few shows out there truly are weird, irreverent and zany. One theme that has popped up is a nerdy take on the holidays. New Millennium Theatre Company is putting on “Silent Night of the Living Dead” for the zombie and horror film nerds. Commedia Beauregard’s “A Klingon Christmas Carol,” in which all of the characters are Klingons (except for the dispassionate Vulcan narrator) and the whole show is performed in the Klingon language with subtitles projected on a screen for the audience, is giving Trekkies the warm and fuzzies. And then for the all-around sci-fi nerd, there is Chemically Imbalanced Comedy’s “A Very Sci-Fi Xmas.”

And then there is the truly risqué holiday tale, a no-kids kind of a show. The Off Off Broadzway group put together a “burlesque-inspired” comedy revue called “Let it Ho!” Even though they reveal nothing to the crowd, they guarantee an arousing performance.

Jill Valentine, one of the writers and actors in the Off Off Broadzway ensemble, said that what sets their show apart from a lot of other shows in this holiday season is that they have original music and every type of comedy like sketch, musical, stand-up and improv. “It’s a medley of different improvs smacked with feathers,” Valentine says.

Another show that fits into the naughty category is “Rudolph the Red-Hosed Reindeer,” created by Hell in a Handbag Productions. “Rudolph” centers around the crisis in the North Pole after Santa’s sex tape is released. Speaking  of sex and Christmas, Stage Left Theatre’s production of “The Eight: Reindeer Monologues” is about how Santa sexually harassed his reindeer. pH Productions’ “The Santa Stories” splits the difference between traditional and raunchy: they have one show that is safe for all and one that is eighteen-and-up only.

Some of these shows have accidentally become traditions themselves—“Rudolph the Red-Hosed Reindeer” has been around for twelve years and “A Klingon Christmas Carol” was created five years ago, though it is playing for only the second time in Chicago. But most of these scandalous shows have only just popped up.  If this trend persists, next season Santa will have to mark down more shows as naughty. (Caylie Sadin)