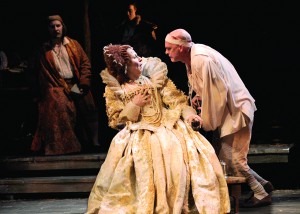 In many ways, Timothy Findley’s play is a gender theorist’s wet dream. On the factual night before the execution of Elizabeth I’s lover, the Earl of Essex, the queen has ordered Shakespeare’s players to perform for her distraction and has a fictional confrontation with Ned Lowenscroft, the actor who played Shakespeare’s leading female roles. The kicker is that Lowenscroft is dying of syphilis. The meeting of a woman who called herself a “prince of Europe” and a man who has made a career of putting on women’s clothes makes for delightful irony. Over the course of the long night in the Queen’s barn where the players have lodged, the actor tries to help Elizabeth find a womanly way to approach the execution, while she demands that Ned confront his death like a real man. As the two leads, Steven Sutcliffe (Ned) and Diane D’Aquila (who originated the role of Elizabeth at Stratford) find a wonderful friction in their sparring, especially in such scenes as when they rehearse scenes from “Antony & Cleopatra” (which in the play Shakespeare is still writing) or when Ned helps fix Elizabeth’s makeup. D’Aquila is particularly powerful as the queen, giving real gravity to lines like this one, which might be the play’s thesis—”What are you most, in there, where you live?” (Neal Ryan Shaw)