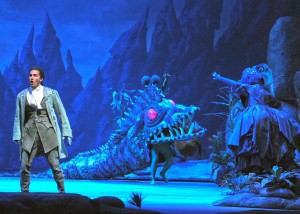 The perfect Mozart opera? Most would pick “The Marriage of Figaro, ” some “Don Giovanni, ” perhaps a handful even “Così fan tutte, ” all Mozart collaborations with brilliant librettist Lorenzo Da Ponte. And yet, for comedy, fantasy and intrigue, “The Magic Flute” has to top the list. A product of those much romanticized last months of his short life, this is Mozart at his most witty, his most charming and at the full height of his soon-to-be-silenced miraculous musical powers.

The memorable August Everding production that Lyric Opera is still using dates back to the mid-1980s and has frankly had more revivals than I can count with casts of various quality levels. After a quarter of a century of use here and elsewhere, apparently some of the pieces could barely be repainted and lighting had to be adjusted to compensate for the age of some of the scenery. If so, this is never obvious in the current revival. This production dates from a time when operatic stagecraft had evolved technically well beyond painted backdrops and when opera directors were often folks of immense imagination and musical insight. It is frankly difficult to imagine a “new” production being mounted today with the sophistication and whimsy that Everding brought to this work—which has remained in the capable hands of Matthew Lata since Everding’s death in 1999—and remarkably, Everding’s vision remains so thoroughly charming and so full of little surprises that new things can be seen in it even after a dozen viewings. 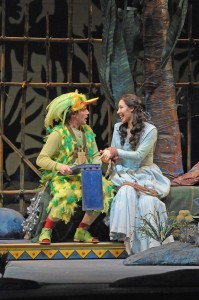 Far better to revive a masterful production of the work with a clear vision of what Mozart had in mind than to offer a new production with minimal sets and a trendy, cost-cutting concept of the work that completely misses the mark. All of the magic—yes, sometimes, literally—is intact, including the dancing animals and magical flowers, making this an ideal opera for families, especially over the holidays.

In addition to the wonders of the production itself, this is one of the strongest casts that we have heard perform in this production in quite some time. Lyric Opera favorite Nicole Cabell could not be more perfectly suited to the role of Pamina either vocally or dramatically; this is by far the best thing she has done here to date. This is a Pamina who makes a meaningful journey across the piece. No less important is that she has terrific chemistry with her love interest Tamino, portrayed by New York tenor Charles Castronovo in a wonderful Lyric debut that skillfully blends tenderness with heroism. Their duets and scenes together sparkle. French baritone Stéphane Degout makes a more introspective incarnation of the bird man Papageno than we may be used to, yet makes the role’s comedy seem more organic as a result, singing it beautifully and confidently throughout. This is one of Sir Andrew Davis’ signature scores, and he conducts it like he is having the time of his life. (Dennis Polkow)