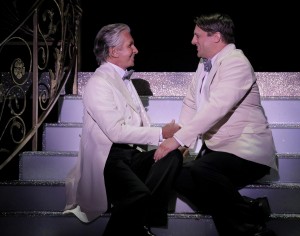 Though the idea of mainstream audiences being even modestly scandalized by drag queens and the depiction of gay characters as loving, funny—well, as human beings is, like, so eighties, I am sad to report that “La Cage Aux Folles” is every bit as relevant today as it was when it debuted on Broadway in 1983. The challenges of achieving social acceptance of a loving long-term gay marriage? Right-wing politicians making hay out of homophobia? Plus ça change.

I did not see it then, but I have to imagine the emerging specter of AIDS at the time of its debut created an aura of sadness around this musical, but the lingering fatigue of cultural hatred these nearly three decades later, as its Tony-winning Broadway revival from 2010 reaches these parts, carries its own weight. It’s a testament to “La Cage” that it soars in spite of this, with Jerry Herman’s timeless songs of self-affirmation (“I Am What I Am,” the first-act-ending show-stopper), of enduring love (“Song on the Sand,” the gentle lullaby of love) and joie de vivre (“The Best of Times” another show-stopper). And Harvey Fierstein’s book manages to deliver a funny and insightful perspective on the highs and lows of long-term monogamy (though one might argue his depictions of heterosexuals are a bit one-dimensional). 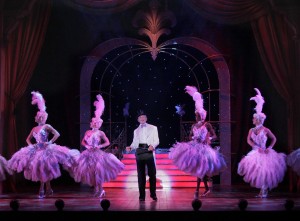 Now, about George Hamilton, who plays the nightclub owner, Georges. The celebrity face of the show, Hamilton has always been, for me, a tan and a haircut, so rarely have I seen him actually doing anything other than making appearances as “himself.” Here, he’s a distraction, a stiff with, to be charitable, very limited vocal talents even for a septuagenarian. To be fair, his role is written in serious diminution next to that of the love of his life and the star of every show, Albin, and Chris Sieber takes full advantage of the opportunity to ascend to the heights of drama queendom-with-a-heart-of-gold. I can say, however, that Hamilton’s puppy-dog charm grows on you, especially in the second act and, by the end, you’re thinking, who knows, with its mix of high camp, a happy ending and rock-solid (if still unconventional) family values, “La Cage” might just be the Christmas show the world needs right now. (Brian Hieggelke)