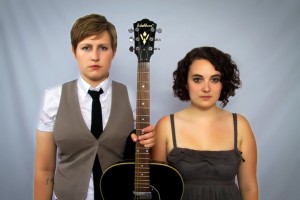 If alcohol did not exist, sketch comedy would have to invent it. I arrived at this brilliant insight sitting alone at a cabaret table on a Sunday afternoon watching the charming duo of “Gretchen and Regina” deliver a set of clever, funny songs about romance and heartbreak to a roomful of Sketchfest patrons swigging PBR Tallboys. (Three dollars at the lobby bar and from hawkers standing on coolers amidst the crowd lining up for the next show. The festival’s organizers are clearly a mile ahead of me in the revelation department.) It didn’t help my increasingly parched brain that Hillary Williams—apparently there is neither a Gretchen nor a Regina—systematically drained one cocktail after another between songs as part of her act. If Hillary’s character is “the drunk,” her partner, Emily Claiborne, is the guitar-strumming boyish “lesbian,” which informs their dialogue more than their songs, I recall. Though their casual banter sometimes seems a bit clunky, they’re actually quite endearing, as are their folky songs. I bet they’re even funnier if you’re drinking along.

Now in its eleventh year, the Chicago Sketch Comedy Festival bills itself as the world’s largest of its kind, featuring 130 acts performing more than 170 shows over two weekends. Tickets are sold on a per-show basis for $14-$15 a pop, but the lively vibe waiting in line for the theaters to reopen between sets tells me that most audience members are within six degrees of the performers, are seeing multiple shows, or perhaps both. The festival does offer a pass for $160, after all. The operation occupies the entirety of Stage 773 (formerly the Theatre Building; as artistic director Brian Posen announces before each show, “we now own the motherfuckin’ building”) with a range of room sizes and configurations. I experienced three out of four setups, seeing two shows in The Box, which ironically, was my least favorite room due to somewhat challenged sight-lines in the back rows and, for the performance of “Exquisite Corpse,” an air conditioner pumping cold air at me with such intensity that I was bundled up in my winter coat and still shivering. Otherwise, the whole enterprise is an impressive exercise in people-moving, with four shows starting and ending at the same time on the hour (performances run about forty minutes each). To their credit, it’s quite efficient without losing its spirit.

Choosing shows is something of a crapshoot, but I didn’t roll any losers. Many of the artist’s bios try to be “fun” rather than informative, and many have no or minimal reviews under their belts, at least reviews that they’re willing to trumpet. I chose repeat visits as one selection rationale, figuring the organizers would not invite back performers who really suck. It served reasonably well. “Awkward Silence” put on a show strong with creative ideas, opening with a crackerjack team of detectives who solve murders by seeking guidance in a newly cracked bottle of vin rouge, sending up the kind of snobs who seem to have an ostentatious gift for “detecting” flavors and scents in wine. Not quite as strong in performative execution as their ideas promised at times, but the show was amusing. 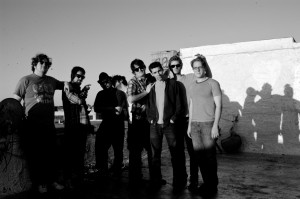 By the time I saw my third performance, “The Sean Miller Explosion,” I’d given in and picked up a Tallboy for company, so perhaps that explains why the show was my favorite of the day. They split their troupe into two fictional groups who discover they’ve been “scheduled” for the same time slot, so they cut a deal to share the stage. Complications ensue. Very strong character performances made this engaging rather than cloying, and the sketches-within-the-show performed by each competing troupe were strong, sending up the medium’s most familiar settings—the detective television show, driving an “air car”—while showing a mastery at the same time. I’d like to see these guys again.

“Exquisite Corpse” is something of a house act, since it’s now a monthly show at Stage 773. Given its name’s legacy as a particular artistic device, I was concerned I’d see too much “sausage-making”; fortunately that was not the case. (The monthly show is apparently something more than this, with live music and a video webisode as the ultimate destination.) Framed as a series of bits set in and around a tiny town diner, where the waitress works as a stripper in between refills of coffee, it was the most narratively cohesive show of the day, with a strong cast of character actors and a modest but adequate flow of laughs. But I learned a real lesson here: even with a cold beer in hand, things are just not as funny when you’re freezing. (Brian Hieggelke)