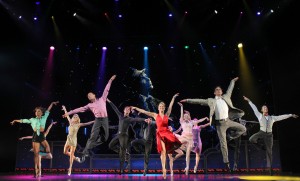 If you go to this “new musical” by legendary choreographer Twyla Tharp expecting anything resembling the musical theater you’re used to, you’re in for a surprise. “Come Fly Away” is a dance performance, not far removed from the kind of thing you’d see at the Harris Theater. (It brought to mind River North Dance’s “Valentine’s Weekend Engagement” from last winter for me.) Sure, there’s a somewhat more elaborate set than the dance crowd is used to, and a boisterous live band onstage accompanies the vocals of Frank Sinatra (given co-principal billing posthumously) by reprising and improvising many of his legendary arrangements, from the likes of Nelson Riddle, Billy May, Quincy Jones and others to a powerful effect. But there is neither dialogue nor narrative other than the most basic notions of couples coupling and copulating as the dancers disrobe late in the show (shirtless men, women in lingerie in this PG-13 fare). As dance goes, it’s pretty spectacular stuff, combining ballet, jazz and Broadway styles in a performance that is more accessible than much contemporary dance but more contemporary than classical ballet. The grace and athleticism of the dancers is consistently topnotch. Costuming is noteworthy as well; unlike the androgynous leotards favored by many dance companies, costume designer Katherine Roth has dialed up the sexuality factor, especially for the women, who sport minimal miniskirts and less; their male partners tend toward thirties-style haberdashery, giving the whole setting a night-at-the-speakeasy vibe. The Chairman of the Board, a brass band and nearly naked folks performing feats of wonder: What’s not to like? (Brian Hieggelke)