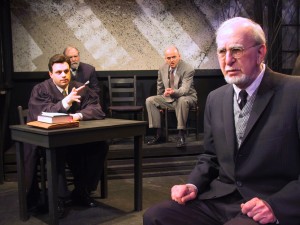 The Shattered Globe Theatre Company wanted to commemorate their twentieth season, but Roger Smart, the artistic director, didn’t want to simply reprise plays they’d previously done. So instead the theater decided to put on a staged-reading series of some of their popular pieces, aptly named “Around the Globe.”

“Judgment at Nuremberg,” based on the trials in Nuremberg of Nazi officials, is the first of the series to be performed.  The play focuses on the trial of four judges who are accused of working with the Nazis and perpetrating horrible crimes on humanity through upholding Nazi laws. Originally performed as a staged reading in October, the Shattered Globe is bringing the reading back again with most of the cast from their first production of it in 2003.

But this time, the staged reading will be at the Illinois Holocaust Museum and Education Center. Smart thinks that the setting is “going to make it an even more poignant experience for the audience.” Another element that will make the show even more poignant is that after the reading, there will be a talkback and discussion with eyewitness Peter Less, one of the interpreters at the Nuremberg trials.

Nigel Patterson, who plays Judge Emil Hahn, was in the original production. Growing up in Britain, he had many friends who grew up in Germany. After visiting Auschwitz, one of the questions that stuck in his mind was “how such dreadful deeds could have been enacted by such ordinary seeming people.”

“Judgment at Nuremberg” is about how atrocities can be committed, not by psychopaths, but by many regular people who say that it is not their responsibility. The Shattered Globe chooses plays that have social relevance, says Smart, which is why the theater decided to bring back the play. They hope that performing it will raise awareness about the ethnic cleansing that still occurs in parts of the world.