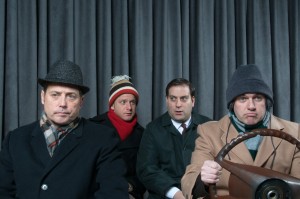 I hate winter. Sure, no Chicagoan really loves the season, but I truly hate it. So any play that depicts winter in its worst light has a leg up with me—just a caveat.

Cities kind of hate winter, too. The blizzard of 1967 was the worst snowstorm in Chicago history, dumping twenty-three inches on the city, heaviest during rush hour and doing what Billy Sunday could not, that is shutting down the town. “Blizzard ’67,” the intriguing new play by Jon Steinhagen, depicts the impact of that fateful event on one carpool of four co-workers of varying rank and age at a faceless downtown corporation. The play’s framed in a faux-documentary fashion, with the actors occasionally narrating their own transitional voiceovers. Though the device usually portends an overly literal exposition, it works here for the most part, especially in establishing the period character of the work, as it recalls the classic TV shows “You Are There” and “Dragnet” that were still in heavy rotation in the sixties. The play is laced with such touches, from the wardrobe, to the specificity of the cars the men drive to the “Man in the Gray Flannel Suit” quality of their office life, especially in the first act as the four characters’ interpersonal dynamic is precisely established. No one ever mentions what this company does, nor do any of them ever do any real work. Instead they kvetch and plot and watch the time clock in anticipation of their return to their equally impersonal carpool.

Director Russ Tutterow is at the top of his game, setting a pace and using music to convey a growing sense of foreboding that something bad is going to happen. Which it does of course; but is it the blizzard or something worse under cover of snow? When the carpoolers get stranded in the storm, they’re forced to make split-second life-or-death decisions that will haunt them the rest of their lives, like a tell-tale heart. Equally haunting will be their growing realization of the emptiness of their lives, as they discover that, though daily companions, they barely know each other.

I’m not sure that the ending works as well as it should, but with pitch-perfect acting from a cast tailor-made for the parts they play, especially the enthralling Stephen Spencer as Henkin and John Gawlik as Landfield, this is a minor concern about an outstanding world-premiere production. Andy Lutz and Andy Hager’s characters take a back seat in every sense, but their performances are equally spot-on. Though a fresh snowfall outside keeping a chill inside the theater probably augments the sense of vérité, I didn’t care for that element. Because I hate winter. (Brian Hieggelke)