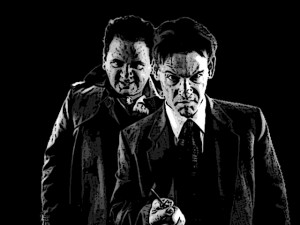 Right up front, the main character (Dennis Frymire) of “Devils Don’t Forget” will tell you he’s not entirely sure how this will all end. He’s riffing on the film noir trope of the unreliable narrator, a genre the Mammals have been playing with for years. Standing there at the top of the show in his underwear and with two conspicuous bandages on his forehead, you wonder though more about what’s already happened than what’s to come.

He might be the devil to which the title refers, the two goons Udo and DumDum (played wonderfully by Don Hall and Gabe Garza) are maybe angels, and the dames are somewhere in between. Every scene is terrifically demented and often fun, until writer/director Bob Fisher loses the thread of the main plot. As far as I could tell, that involved something to do with the main character’s memory and resisting the orders of the mysterious “Father” (performing with a slithering menace by the duo of Justin Warren and Erin Orr). If you like the sharp turns and graphic drama of old-timey comics and movies, though, this is a show for you—and don’t forget the beer. (Neal Ryan Shaw)