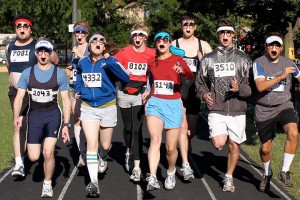 In a remount of their well-received 2011 improv format, Playground Theater ensemble member K.C. Redheart once again takes the audience through “the entire process of bringing a show to the stage, ” breaking the action into three parts: the initial table read, a tech rehearsal and opening night. Working from an audience suggestion of the title of a show that has never been written or produced, the troupe (all sporting blank paper “scripts”) kicks off sitting in a semi-circle with the “director” welcoming his “cast” and letting them introduce themselves. This is where the audience first gets a glimpse of the characters who will be playing the characters (so meta!) in this forty-five-minute show-within-a-show. Along the way, the improvisers use their own experience to flavor the rehearsal process with director’s notes, off-stage relationships interfering with scene dynamics and theatrical hubris. The result is a piece with genuine character-building and enough laughs to rival any scripted show. The Playground is always BYOB and “Out of Character” plays in tandem with “Process.” (Zach Freeman)