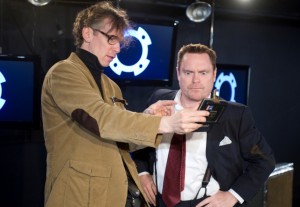 A nervous inventor (Larry Grimm) pitches his latest creation to a smarmy business executive (Danny McCarthy) in the confines of a metallic negotiation room that gives off the claustrophobic feeling of an inner chamber in a giant machine (scenic design by John Dalton).  It’s a creation he breathlessly claims will change not just the world, but our very perception of the EVERYDAY. Playwright Brett Neveu’s latest work is a comically dark take on big business, set in a surreal world of branding, mass-produced scientific discoveries, back-stabbing, mutant creatures that appear to be children and a band of unseen protesters known simply as the “tight-shirts.” Director Dado paces the show in a stylized manner, actors shooting out dialogue with a machine-gun quality, particularly McCarthy’s cocksure businessman, who spouts lines like “I’m me. You’re you. What else can we do?” with a sort of sing-songy smug finalism. Corruption and destruction are presented light-heartedly enough to let us laugh at the horror of it all. (Zach Freeman)