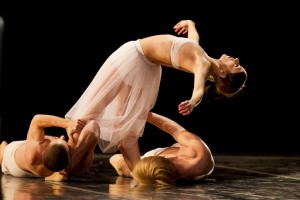 The choreographer’s media are time, space and human beings—three very pricey (yet frightfully undervalued) commodities. Thus choreographers, more than painters or photographers or sculptors, must constantly scramble for sponsorship and funding before their work can even commence. Hubbard Street provides these resources to budding choreographers within the company, giving them studio time and the opportunity to choreograph on each other, via their annual Inside/Out Choreographic Workshop. Artistic Director Glenn Edgerton is taking the next step in cultivating new talent, by giving a few of these budding choreographers the chance to further develop and present selected works in a full-scale production at the MCA. Edgerton curated the program, which includes works by company members Jonathan Fredrickson, Alice Klock, Robyn Mineko Williams and Johnny McMillan, as well as resident choreographer powerhouse Alejandro Cerrudo and Rehearsal Director Terence Marling.

Marling’s piece is the very embodiment of the festival’s title, “danc(e)volve.” It emerged from his well-received piece “twice (once),” performed with the CSO and set to original music by Anna Clyne. “I took the video from that performance and overlaid on a piece of music I’d made myself—I knew I’d write my own music because the Anna Clyne music isn’t commercially available,” Marling says. “The timing of things, the quality—everything was so perfect it felt like it was meant to be. There are going to be these two living versions of this piece that have totally different meanings.”

As rehearsal director, Marling was pulling more than double-duty, working on his own piece while making sure things went smoothly for eight choreographers. “A lot of my time is trying to keep the choreographers happy,” he says. “That’s my job, but usually it’s one super-famous choreographer at a time. Everyone has wound up happy and it’s a really wonderful feeling. I’m impressed by how diverse the work is and how much talent we have in the studios. I’ve never seen anything like it.”

Edgerton also remarked more than once on the energy in the studios. “You go from studio to studio here and you see choreographers getting immersed in their world, then they move to another studio and get immersed in someone else’s world—you can feel the creativity in the air.”

The program also includes two winners of Hubbard Street’s National Choreographic Competition—pieces that wouldn’t normally have been performed in this context. “So often we make work that doesn’t make it to the stage,” Edgerton says. “We have a hotbed of creativity here and want to show it.” (Sharon Hoyer)