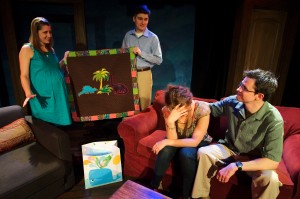 Before the opening-night performance, 16th Street artistic director Ann Filmer shared with the audience the genesis of her bringing Eric Pfeffinger’s “Accidental Rapture” back to the stage nine years after she’d seen it performed by a tiny theater company in Chicago. She could think of no better time, she said, for a play about the Rapture than in 2012, the year the Mayan calendar predicted the world would meet its apocalypse. And, although she did not mention it, there’s another strong reason to stage this play now: its narrative about the challenges that two groups of Americans—fundamentalist Christians and secular humanists—have in getting along seems more relevant than ever in this election year.

After years of growing farther apart, onetime college partners-in-mischief are reunited when Paul (Niall McGinty) and his wife Amy (Laura Shatkus)—now pretentious professors in Chicago—travel to Philadelphia for the baby shower of  Richard (Rob Fagin) and his wife Kim (Erin Myers), the latter being the only member of this cohort who did not attend college together and, to make it worse, is an evangelical Christian who has brought Richard firmly back into the flock he’d deserted in his youth. Discomforts ensue, especially for the benefit of an audience ready to laugh at the crazy Christians—They don’t believe dinosaurs existed! Ha, ha! But the laugh’s on Paul and Amy and the audience when—Who knew?—the Rapture comes at the end of act one. Not so crazy after all. 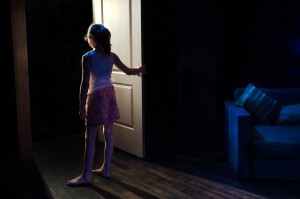 This is a tightly directed production by Kevin Christopher Fox that makes creative use of the very intimate 16th Street space, augmented by a universally fine cast. In spite of some superfluous cameo flashbacks and a fifth-wheel named Lydia who was Richard’s dark-side college gal (fine actor Stephanie Diaz is saddled with a cliché´of a life gone awry; the gothic getup and pierced tongue are the giveaways), the script sails along pretty well for about two-thirds of the way, delivering laughs and posing some very original scenarios, especially in the immediate aftermath of the big event, when everyone wonders why Paul and Amy “made it through” even though they were ardent non-believers. Unfortunately, Pfeffinger seems more interested in the science fiction of the whole thing than the interesting philosophical questions that might be explored, leading us to a less-than-satisfying resolution. Even if the end of the world isn’t all that it’s cracked up to be, the journey with these characters, and some intriguing ideas that bring the philosophy of science right to religion’s doorstep without crossing the threshold, make for some compelling theater. Especially given that, with the role that religion plays in our society and political system, there’s an odd dearth of material like this, material that questions the absence of faith with almost as much vigor as it questions its presence. (Brian Hieggelke)