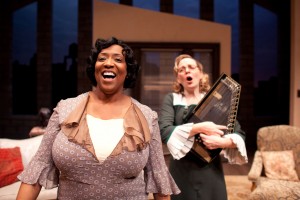 During the Depression, as America experienced a drastic disillusionment with the idea of progress, a nostalgia set in for the pre-industrial past. The embodiment of that is Susannah (Susie McMonagle), an ambitious and tightly wound ethnomusicologist working for the Library of Congress, who encounters the gruff and skeptical Pearl (E. Faye Butler), an African-American prisoner originally from the Sea Islands who contains within herself a treasury of antebellum songs. She may even possess Susannah’s Holy Grail: pre-slavery songs brought over from Africa. Pearl is initially unimpressed by Susannah’s quest—“You be a white woman, and this is your dream?” Replies Susannah: “When a person dies, a library is lost.” Her primitive recording equipment is an attempt to stave off extinction and create a kind of immortality for herself and her informants. Pearl eventually comes to see Susannah as her ticket to parole and the freedom to find the daughter with whom she has lost contact during her decade behind bars. The play’s second act takes place in New York, where the ever-domineering Susannah has turned Pearl away from her search for her daughter and into a faddish folk act, whose carefully engineered “authenticity” wows an audience of jaded white sophisticates. Is Susannah Pearl’s friend as she claims, or a combination Henry Higgins and Svengali? The conflict builds toward crisis when Susannah presents her protégé with a striped jailbird outfit and tells her to sing songs about “hoodoo,” not union ballads, which clash with the primitive image. Skillfully acted, beautifully sung and generally well-staged by director Steve Scott, “Black Pearl Sings!” has many fine moments, but never quite congeals as story or character study. Playwright Frank Higgins seems reluctant to pull the audience into uncomfortable racial, political or psychological territory. The tension between Susannah, the Ivy League careerist looking to strike folkloric gold, and Pearl, a hard-pressed but innately dignified woman who fears being transmuted into a blackface minstrel, dissolves into sentimental reconciliation. In the end Pearl decides, like many a performer since, that exploitation by another may be wrong, but self-commodification is perfectly acceptable. The play is based on the relationship between the real-life folklorist John Lomax and convict-turned-celebrity Huddie Ledbetter, better known as Lead Belly. Playwright Higgins changed their sex and story in order to avoid the constraints of documentary. But in substituting melodrama for history, he has blunted the play’s impact. Despite Northlight’s strong production and charismatic leads, the work never quite nails its time, place and potentially powerful theme. (Hugh Iglarsh)