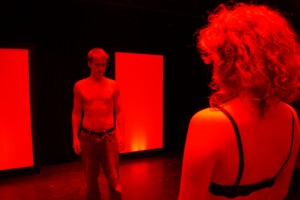 “Dark Play or Stories for Boys” is a cautionary tale about teenagers’ willingness to avoid face-to-face conversations and retreat to the worldwide web in order to feel what they want to feel. The omnipresence of the internet today, and the resulting confusion about what’s real and what’s not real, perpetuates cruelty that only shows through their stifled cries. Director Anthony Moseley’s intimate staging and the undeniable rawness of the actors render “Dark Play” a deeply felt Chicago premiere.

Clancy McCartney plays Nick, a college-aged young man who reveals that he fabricated multiple online identities in his high-school days at the expense of Adam, a gullible peer eager to fall in love. While narrating his story, McCartney sometimes makes a sound in between a growl and a cackle. It’s stuffed desperation—the rage, the lust, the elusive hunger to be more whole than adolescence allows. McCartney masterfully switches tones: while inducing hate and apprehension in the audience through his sadistic glee, the despair on his face renders him a soul strangled by the social hierarchy of his high school. Even though he’s cruel, it’s tempting to see him as vulnerable to a larger problem. 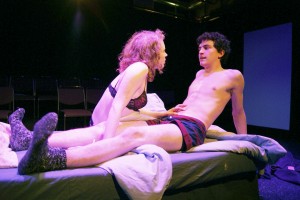 But Adam, Nick’s victim, calls the whole notion of vulnerability itself into question. He’s convinced that he loves Rachel, a made-up girl that he’s only met in a chat room. Actor Aaron Kirby delivers Adam with puppy-dog eyes accompanied by thoughtlessness in speech, and we’re not sure whether his dominant quality is innocence or hollowness. What does seem apparent is his willingness to ignore the need for tangible evidence that Rachel, the fictional girl of his dreams, really exists. He reminds us of our ability to be deceived; that repressed terror that makes us think “anyone who is that much of a sucker must have chosen to be one.”

The production’s minimal scenery forces the audiences into intimacy with the characters’ fantasies. Pink and blue lights flash on either side of the stage while ominous techno sounds underscore the action.

What these characters evoke is not pity but sickened empathy.  Their world is in constant flux, never nailed down or made concrete, floating in horrific colors and sounds of cyberspace. It’s easy to dismiss the situation of “Dark Play” as limited to a couple of disturbed teenagers. But imagining a loved one falling victim to similar circumstances is sure to give anyone pause. (Nate Speare)