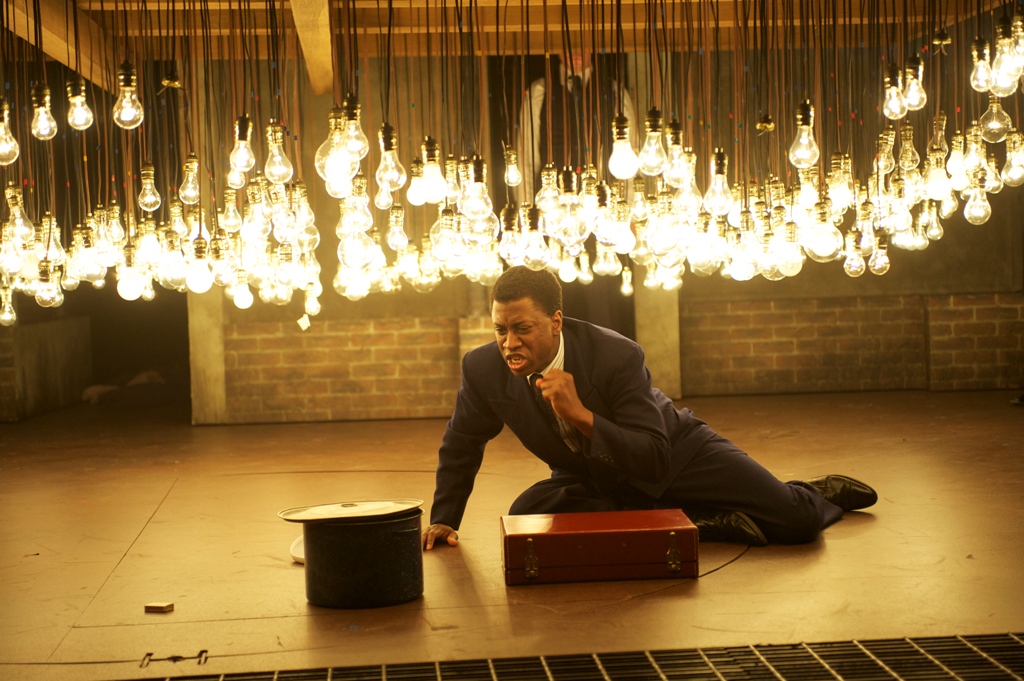 There’s a certain advantage to adapting a masterpiece of literature to the stage: the story and the characters are proven entities, not likely to elicit complaints about plausibility or development. But there is an even bigger disadvantage: not only will audiences inevitably make comparisons, usually unfavorable, to the primary work, but the distillation of a novel the length of Ralph Ellison’s “Invisible Man” into a three-hour stage play (including two intermissions) will necessitate vast edits that might threaten clarity even if, as is the case here, the dialogue is drawn strictly from Ellison’s text. Contrarily, the risk is equally great that careful adherence to the text will result in a work that, while unquestioned genius on the page, is plodding on the stage.

Fortunately, most of these potential problems have been avoided with Oren Jacoby’s world-premiere adaptation of “Invisible Man,” now playing at Court. Under Christopher McElroen’s direction, the story unfolds clearly and at a suitable pace, even in the face of the challenge to convey the author’s experimental structure and musicality of form and language. (A few passages do seem to sag, mostly those where the narrator is getting some kind of life-lesson speech from a bystander.) 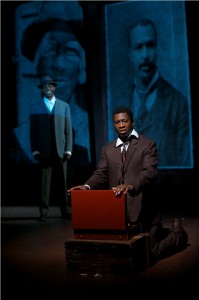 The performance of Teagle F. Bougere as “Invisible Man” is a wonder. From his famous opening monologue (“I am an invisible man”) to the epilogue and throughout the life journey from the South to Harlem in between, Bougere creates a character who manages to be both entirely sympathetic and yet somehow, too, a cipher (“invisible”?) to the audience. It doesn’t hurt that he’s surrounded by an outstanding cast of both veterans and newcomers to the Court stage. The inventiveness of the stagecraft—the way actors and even set elements move are choreographed with the rhythm of dancers—and Troy Hourie’s scenic design is worth a ticket itself, from the opening and closing set of the Harlem basement apartment lit “brighter than Broadway” to the creative use of projections designed by Alex Koch.

Watching “Invisible Man,” I often felt like I was watching an August Wilson play, with its creative narrative structure and the immersion of music into the sinew of the work. Since Ellison was one of the major influences in the late playwright’s life, I suspect he’d be happy to hear that. (Brian Hieggelke)