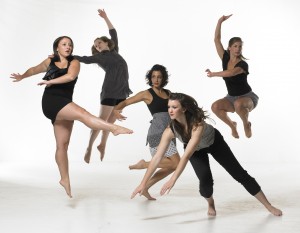 “I’m pretty committed to doing solos every year,” Margi Cole tells me. “It’s important to me as a director and leader to put myself in a position where I’m learning.”

Taking that position this year involved a trip across the pond to work with American choreographer Deborah Hay. Hay—a Merce Cunningham alum—has made herself a nexus of artist development with the Solo Performance Commissioning Project, in which twenty dancers apply to learn a single solo piece created by Hay. After a week and a half of intensive study and coaching, participants disperse to their homes around the globe, continuing to work independently for at least three months before performing the piece in public.

“One of the hard things about doing the practice without Deborah is that she’s a really great coach,” Cole says. “She talks a lot about being in the moment and committing to the material in the solo and inviting your self to be seen. In that invitation the execution of the solo is about your survival. I think if I was younger I wouldn’t have gotten as much out of it as I did.”

Dancers selected for the project are charged with raising funds for the commission and all expenses, as a way of creating accountability to their investors and their community. A grant from the Driehaus Foundation and a Kickstarter collectively got Cole sufficient cash to cover the commission and travel to Scotland. The time she spent there was creative fodder for “Moving Stories,” her new full-company piece about conceptions of home.

“I was gone for two and a half weeks. You have one bag of creature comforts. It’s all you have and you can manage without the other stuff you have. It made me think about how home is defined. We’ve been exploring the idea of moving—from place to place—and the memory of the first time that you were really truly moved and what that experience was.”

The program is entitled “Built By Fault,” as in, constructed on the tenuous ground near a fault line. “It’s the nature of performance,” says Cole. “But it’s exciting.” (Sharon Hoyer)