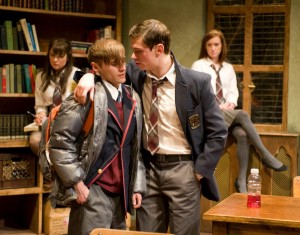 Lest one be confused by the title of this 2009 Simon Stephens play, Griffin opens the show with the image of British schoolchildren rocking out to Big Black’s “Kerosene,” a mean thrasher whose lines “Probably come to die in this town, lived here my whole life” encapsulate the very palpable fears of the play’s protagonists. Ever the mouthpiece for disenfranchised youths, the punk ethos pervades the show, if not the aesthetic. Set in a suburb of Manchester, England, and inspired by the 1999 Columbine shootings, “Punk Rock” creates a portrait of teenage violence that seems to come from a modern disdain for small-town, middle-class monotony.

If the show appears at first a little bit predictable, it’s because Stephens is playing with archetypes. You’ve got the main character William, the dour, angsty one who falls for the rebellious new girl, Lilly. The preppy couple Bennett and Cissy, the bad boy Nicholas, the BFF Tanya and the weird one, Chadwick. Actually it seems almost a formula for a teen rom-com, but Stephens’ deft writing portrays intelligent, articulate, complex, brooding figures whose small town problems indicate the state of the unfolding century. After two previous productions of Stephens’ work, Griffin clearly has a grasp of his style, which shows in this detailed, engaging and often devastating show. (Neal Ryan Shaw)