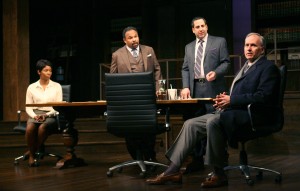 When David Mamet was on Charlie Rose promoting the New York premiere of his new play “Race” last year, he was naturally enough asked what he thought of President Obama. “I would rather not answer that question,” he said after a long silence, “as it might influence how people approach this play.” Since then, Mamet has released his infamous liberal-to-conservative manifesto, “The Secret Knowledge: On the Dismantling of American Culture,” a kind of upside-down Augustine’s “Confessions” where he describes Obama’s “Change” that was so “accepted by a drugged populace and a supine press” as “the unfortunate descent of a productive nation into socialism” where “racial tensions have devolved to acrimony unknown in this country for decades.” Of Obama’s declaration that “Selma belongs to me, too,” Mamet assesses, “but the credit does not.”

No wonder in promoting the Chicago premiere of “Race” that Goodman Theatre, Mamet’s old stomping ground, has by and large turned the production over to its African-American director Chuck Smith. Also no wonder that, while Goodman’s gift shop had plenty of copies of “Race” on hand and virtually any other Mamet play for sale during intermission opening night as well as his book of theater essays, “The Secret Knowledge,” Mamet’s latest and most controversial opus, was nowhere to be found.

To Mamet’s credit, taken as a whole, “Race” by and large does not explicitly betray its author’s views largely because of the play’s structure as a crime mystery where Mamet does make considerable and effective use of his immense skill as a dramatist. It would be unfair to say much more in that regard without revealing too much, but suffice to say that the play does have plenty of jagged red herrings that do get our interest and attention along the way. The problem is that these are uttered by one-dimensional characters that we are never given a chance to actually know and therefore that we never care about. Yes, they have names (I only know this because Mamet lists them in the printed version of the play, not because the names are used much or needed during the play itself) but their descriptions are telling as to their function: two white men in their forties, one black man in his forties, one black woman in her twenties. 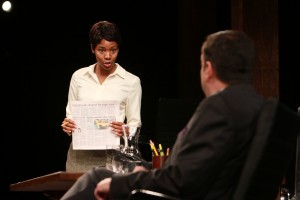 There is no credible world that these characters inhabit, rather, they serve as mere mouthpieces for vitriolic stereotypes not only constantly uttered by the characters about themselves and others, but also acted out by them. No one escapes Mamet’s disdain: white, black, illegal immigrants, classes, politicians, but especially, lawyers. Oddly, Mamet has given us a courtroom drama without a courtroom, as if lawyers stand around and “play” Perry Mason-style amongst themselves when considering whether or not to take a case.

What makes any of this work aside from the sheer shock value of the no-holds-barred nature of what is actually said—which in and of itself often has audience members laughing nervously, almost in a puerile “You can’t say that” sense—is that so many of the things these characters have to say are more eloquent and polished versions of the kinds of things that are said and heard every day, sad to say, at the water cooler at the office, at the dinner table, et al, concerning race. But whereas this subject might come up now and then in real life, and one would hope that among civilized people there would be more common sense given to what is said than in this play, the characters suffer from a fixation on the subject that even the play’s plot device of a white man being accused of raping a black woman cannot manage to make plausible.

Aside from these characters being smart enough to recognize the reality of racism and bias, none are ultimately smart enough to be fair nonetheless despite their own biases, which flies directly in the face of every hard won battle of progress that has happened concerning race relations in this country.

Therein lies the central flaw of the play, one that goes back to the fundamental conceit of the show, ironically addressed even within the show itself straight off by the black man in his forties, preaching to the white man in his forties, which could well be applied to Mamet himself: “What can you say about race as a white man? Nothing.” (Dennis Polkow)