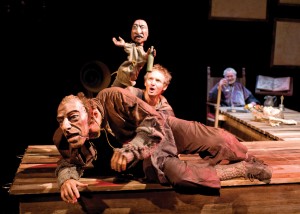 What if all the magical action in “The Tempest” happened inside the head of one bitter, wronged man? “The Feast” portrays a tormented Prospero (John Judd) commanding his slaves Ariel (Samuel Taylor) and Caliban (Adrian Danzig) to repeatedly act out an unfolding drama of his own creation using masks and puppets. But despite all its intricate (and often ingenious) puppetry, digital projections and sound effects, the most intriguing part of this Shakespearean adaptation (co-created and co-directed by Jessica Thebus and Redmoon’s Frank Maugeri) is the central thesis, which posits that perhaps Prospero doesn’t need to sink a ship and physically unleash his vengeance on his usurping brother Antonio in order to seek retribution. Rather, he has the power to forgive by working through his anger and hurt in his own way. Shakespeare purists may not appreciate the slicing of the language (the entire show is around eighty minutes) and those unfamiliar with “The Tempest” may miss some key points, but this reworking successfully mixes spectacle and self-realization. (Zach Freeman)