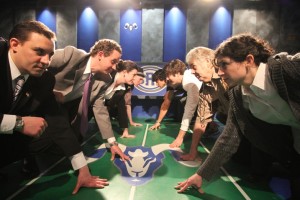 The cast of "Motion"/Photo: Johnny Knight

Ronan Marra, one of the founders of Signal Ensemble Theatre and playwright of their breakout hit “Aftermath,” is a huge football nerd. He’s been an NFL fan since he was a kid. He knows the ins and outs, not just of the game, but the behind-the-scenes, the draft, the politics—you name it.

“For the last several years I’ve been wanting to write a play about professional football somehow, but I really didn’t know how to. I kind of knew that it would have to be something about the behind-the-scenes, but I didn’t have an entry point for it yet.”

The lockout gave him that entry point. Marra, and many fans, saw the lockout coming a year or so before it happened, which is when he started writing. The lockout affected not just the big players, the “billionaires versus the millionaires,” but the people who work in the stadiums and depend on a paycheck from the NFL. It became the backdrop for a drama between people: In Marra’s play, all eight characters represent a different level of person who is affected by the lockout.

The director, Aaron Snook, had worked with Marra on “Aftermath” and loved the new play after reading a draft of “Motion.” So when Marra approached him to direct the play, he jumped at the chance.

He attempted to take what he describes as a cinematic script and stage it in a theatrical manner. Snook, a football fan himself, had the idea to transform the theater into a mini-stadium. They use minimal props, sounds and lights. The actors are constantly on stage.

Balancing the football aspect and the human relationships was paramount in his mind so that he could make sure that “football fans are going to have a riot, but at the same time, it’s really accessible to people who spend their Sundays somewhere else.”

Meredith Alvarez, who plays the sport’s first female general manager, grew up loving football. But what she knew, she knew from a fan’s perspective. She didn’t know much about football behind-the-scenes or the inner workings of the game. As a general manager in the show, she had to learn a lot of offensive and defensive schemes and plays. Forevermore, she says, she will watch a game a little differently.

They all savored the fact that they were able to tell friends and family that they had to watch the games as research for the play.

The show will be playing on Superbowl Sunday, but for football and theater fans, Signal made sure that you will not have to pick between them. There will be a special event where patrons can see the show at 2pm, “lobbygate” after the show, and then watch the game projected in the theater. Marra and Snook project the Patriots will do it again, but Alvarez is betting on the Giants. (Caylie Sadin)

“Motion” plays through March 3 at Signal Ensemble Theatre, 1802 West Berenice. The Superbowl Sunday show at 2pm with an aftershow will have food catered by Bad Dog Tavern, included in the $30 ticket.