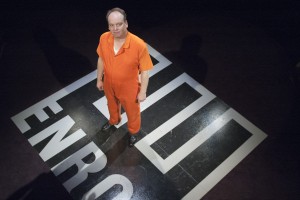 Jeffrey Skilling (Bret Tuomi) comes to Enron with new ideas: mark-to-market accounting, electricity trading. The company makes fistfuls of cash and causes fatal, rolling blackouts in California. But it’s not just Skilling’s ideas that are scandalous; it’s that everyone (Enron lawyers and accountants, the financial industry) lets him get away with it.

I was skeptical about the theatrical potential of illicit number crunching. But Rachel Rockwell’s brisk staging, while visually heavy-handed, keeps the piece from reading like a balance sheet. Lucy Prebble’s script is a tad bloated but the company’s panicked downfall is a whirlwind of denial. It’s fun to see where the finger’s pointed next.