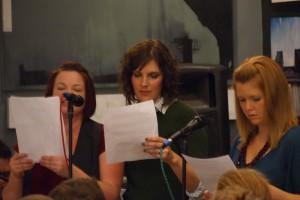 Calling itself the “metropolitan” version of “A Prairie Home Companion, ” this monthly live radio-show-cum-podcast takes what Garrison Keillor has been doing for decades and adapts it for a younger, hipper crowd, throwing in more laughs (and more swearing). Led with a mix of wide-eyed earnestness and subtle cynicism by artistic director and head writer Matt Lyle, “The City Life Supplement” even has its very own Lake Wobegone: the fictional north Chicago neighborhood of Ravens Park, where you can get a five-dollar haircut from a Serbian named Milos or listen to your favorite hipster soap opera “As the World Sighs” (set in Wicker Park, natch). Boasting a large cast of adept vocal talent (who portray an even larger cast of characters) along with a killer in-house band (guitarist Phil Garno and pianist Eric Loughlin) and a winsome foley artist (Chad Spear), the taping of the inaugural episode clearly showcased the ingenuity of the troupe and the charm of Transistor Chicago’s tight quarters. With a wink and a sideways grin, “The City Life Supplement” deftly maintains a balance between wholesome radio shows of yesteryear and the snarky comedy of today. (Zach Freeman)