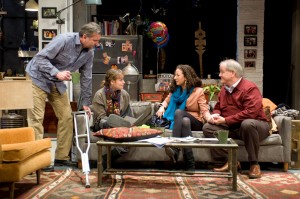 War photographer Sarah, played with a sense of psychic damage to match her physically wrecked state by Sally Murphy, is home in New York with her long-term companion James, a freelance war journalist, who Randall Newsome injects with just enough emotionalism to complement Sarah’s internal struggle. She’s just barely survived a horrible injury while on assignment. Addicted to excitement, they’re the “Sid and Nancy” of journalism, as their pal Richard (Francis Guinan, brilliant as always) describes them in exasperation. But when Richard introduces his young and bright and naive new girlfriend, Mandy Bloom (Kristina Valada-Viars, charmingly bathetic), Sarah and James come to question the decisions they’ve made about life and love.

Donald Margulies’ script is a fine blend of humor and trauma, with engaging ideas about the impotence of journalism in the world of human suffering. At one point, Mandy recoils at the idea that the photojournalist could stand by and take pictures as a child is killed, rather than intervening. Sarah offers the journalistically correct answer about the power of bearing witness to change the world for the better, but she’s not very convincing. (Does anyone notice that we’re all culpable, including Mandy? How can a world stand by and let such things continue?) Eventually, Margulies makes sure we get his point, when the characters attend a play about a foreign danger zone. The critics called it “shattering” and James can’t abide the whole thing, railing about the comfortable NPR-listening liberals who “inform” themselves and do little else. The Taliban needs to see it, he exclaims, before suggesting they’re not seeing much theater these days. James is a hypocrite since he sells his stories to the American glossies, like Vanity Fair, who reach a similarly Taliban-less audience. 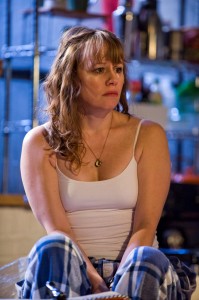 Having posed the problem, Margulies has no solution; his characters go on—some change, others don’t, but heartbreak lingers and no one is going to change the world. It’s powerful work.

Director Austin Pendleton lets his outstanding ensemble do its thing. He places an unusual number of scenes in the dark, or near dark, a nice touch that not only conveys the play of light and dark in photography, but also the complex shading of truth and knowledge and their powerlessness in the face of human nature. (Brian Hieggelke)