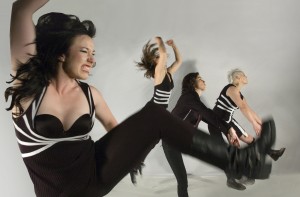 Therapy, motivational albums, self-help books, tranquilizers, psychotropic drugs… Freud gave a language and a theory to our modern psychological damage, the rest of the twentieth century gave us ways to mend it. Atalee Judy and the newly christened BONEdanse delve into our peculiar cultural history of psychic damage control, including 1950s-era recordings from Dr. Beverley Weeks advising anxious housewives to up their tranquilizer regimen and case studies of characters suffering varying degrees of dysfunction: the hypochondriac, the hysterical housewife and, more daringly, the sociopath dictator. Jyl Fehrenkamp contributes a solo for company member Mindy Meyers around the nervous woman trope, separately entitled “The Woman Who Had It All.”

This performance marks a stylistic departure for Judy, who last year dissolved Breakbone DanceCo, stepping back from her Bodyslam technique and opening her process up to collaboration in an effort to smudge what has become a signature style. The personally difficult process of dismantling the company made Judy reflect on the damage we all carry. “Damage Manual” will, in a larger sense, demonstrate the creative fruits of destruction. (Sharon Hoyer)

Thank you Sharon! Once again, beautifully written and so well communicated with your signature style of truly understanding (or seemingly to) the concept and inspirations that go into creating this dance stuff! Thank you! Wonderful read. Hope the show lives up to your writing!
Cheers
~Atalee