by Brian Hieggelke
January 31, 2012Filed under: 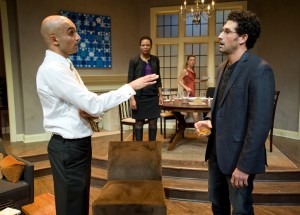 Amir is an American of Islamic heritage, his parents from the part of the world now known as Pakistan. He seems fully assimilated in all the ways mainstream America would want him to be: he’s disavowed the religion of his people, married a white woman and, most important of all, become an asshole corporate lawyer who wears $600 shirts. For what aspiration is more American than to be an asshole corporate lawyer?

But no one wants the assimilated Amir. Not his nephew who still clings to the Koran. Nor his wife, who’s using Islam in a  contemporary version of radical chic to establish her career as an artist. And in the ultimate act of identity suppression, he’s immersed himself, it seems, in a world of American Jews—at his law firm, among his social circle.

Ayad Akhtar’s new play, in its world-premiere production under the able direction of Kimberly Senior, is an important new work that gives voice to an underrepresented constituency, the Islamic American, but does so without sugarcoating the issues or the players. Amir, played with brilliant intensity by Usman Ally, is simultaneously a sympathetic and hateful character, even beyond his choice of career. He’s bright, and wants nothing more than to be a name partner at his firm, but he can’t shake his heritage. Fueled by alcohol, he begins to speak thoughts better left unsaid, and his world begins to unravel.

Parsing the antihero Amir is a complicated process; his friends, family and we, the audience, try to filter things through our own perspectives (mine, white American of Northern European Protestant heritage, for the record) and make judgments based on that frame of reference. His every action, his every word, is fraught with subtext. He’s acutely self-aware of this and yet he can’t overcome it. In this realm, everyone dies of heartbreak.

There’s an interesting thematic convergence on Chicago’s stages right now, with “Disgraced” at ATC, “Race” at the Goodman and “Invisible Man” at Court. All superlative productions, coming from very different points of origin. But this powerful, intense, unrelenting work, which seemed to speak with urgent, visceral angst as opposed to the comparatively safe dialectic acrobatics of David Mamet, made the latter’s “Race” seem like cotton candy by comparison, mere popcorn for the brain. (Brian Hieggelke)