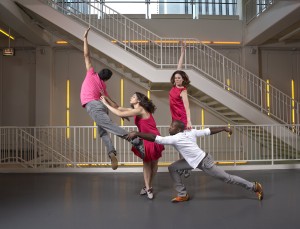 A stirring dance show can make a body want to dance right out of the theater, swinging around railings and leaping down stairs. The Seldoms get to do just that as lobbies, stairwells, backstage, balconies, the primo seats and—why not?—the stage too, as every corner of the Harris Theater becomes performance space in “This Is Not A Dance Concert,” their highest-profile site-specific work to date. Dancers (and musicians, led by Tim Daisy) are stationed at different locations throughout the five-story theater. The audience, divided in four, moves from scene to scene, watching dances that playfully riff with benches and railings and, notably, a clothing rack that briefly becomes the star of the show. The Seldoms have a reputation for making dances that point to their environments—an industrial garage, a swimming pool—or, in the case of their 2008 piece about landfills entitled “Monument” and last year’s econ 101 “Stupormarket,” our environment at large.

The Harris dissection is less an anatomy lesson of a building than a psychological profile of its denizens. And, like a deconstructed “Chorus Line” or “The Muppet Show,” the show is about the part of the show you’re not supposed to be watching. A trio in the house sit mashed in beside one another, climbing and rolling over each other’s laps to access the aisle, one of them fixated on the program the whole time. Fidgets exaggerate and grow to a truly funny fever pitch. Another trio in the third floor lobby dance in and out of the restrooms, commenting extensively on their cleanliness and accessibility—remarks that artistic director Carrie Hanson pulled from Yelp reviews.

“The Yelp reviews were of the venue itself. It really struck me how concessions were a big deal, the bathrooms were a big deal, the parking. Things I think of as peripheral were really central to people’s experience,” Hanson says. “It was a wake-up call about how I become immersed and obsessed with what I’m making and think the audience is as wrapped up with it as I am. I spend months with it and they spend one night with it.”

The private thoughts of the performers are voiced too: reactions to and critique of the choreography, anxieties about some bigger-name performers playing down the street (“If you had $60 you could see Barry Manilow. He’s a star!”). Though the venue is monumental, the mood is light, as though the company broke into the Harris and you’ve caught them rearranging the furniture and monkeying around in the genie lofts. “There’s a sense of play and confidence and boldness,” Hanson says. “There’s something about this whole event that will feel new to this audience.” 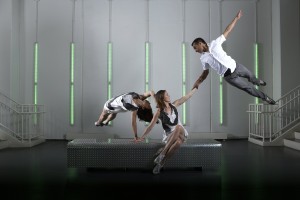 The playful boldness is reflected in costuming by designer Maria Pinto. Bright colors, varied textures, sequins and feathers bedeck skirts and dresses, tops and half-tops, pants and chaps worn in wild combination. Hanson says she and Pinto defined the look as Lower East Side Manhattan, but my impression was kids that have raided the closet to play dress-up. Perhaps they’re one and the same.

Childhood is central, along with the clothing rack, to the final scene, when the entire cast and audience are reunited on the stage. The dancers talk about their childhood dream jobs as formations become more complex growing from trios to groups of four and five. After the smaller duet and trio sequences, the finale is big, dramatic. And it’s definitely the closest an audience will ever have been to performers on the Harris stage.

Though her new work is cheeky, the scope of the project—along with The Seldoms’ ten-year anniversary—has given Hanson moments of pause. “I’ve been reflecting on doing this for ten years, on landing some kinds of success. And realizing that at this tier, where I’m operating in the Chicago arts community, there is a little bit of a ceiling. I’ve been looking at my budget thinking about how do I get to this mark? How do I build audiences? I wonder is this group successful? What is success?”

Some might say it’s getting to dance wherever you want in the Harris Theater.